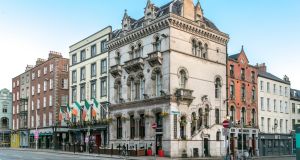 The Dublin Citi Hotel at the entrance to Temple Bar on Dame Street goes on the market today in a planned sale and leaseback arrangement expected to appeal mainly to private investors and independent investment funds.

Savills Ireland is guiding €10.7 million for the attractive 27-bedroom hotel, to be let on a new 25-year lease at a rent of €660,000. Five yearly rent reviews will be linked to the Consumer Price Index.

The initial arrangement will give the new owner a net initial yield of 5.69 per cent after standard acquisition costs of 8.46 per cent. Significantly, Aaron Spring of Savills, who is handling the sale, says “there may be potential to achieve vacant possession, subject to agreement”.

Irish investors will be well aware that there have been few recent opportunities to buy leased hotels in Ireland. It is a different story in the UK, where almost 50 per cent of all hotel sales in 2017 involved leased assets.

The last significant sale and leaseback of a hotel in Dublin involved the Gibson Hotel in the docklands, which is operated by Dalata and was sold to the Germany investor Deka for about €90 million. Savills also handled the sale, which was agreed a net initial yield of 4.8 per cent.

The Dublin Citi Hotel is based in two exquisite period buildings dating from 1868 and 1910 and featuring ornate brick walls and polished red granite. Both buildings were originally designed as offices and so used until 1996, when they were converted for hotel and bar use.

The hotel is located beside the former Central Bank, which is undergoing major changes including the opening of additional office and retail space as well as a 300-seat roof top restaurant, bar and viewing deck.

The huge changes taking place on the bank site as well as the planned pedestrianisation of much of College Green are expected to generate additional footfall in the area around the Citi Hotel. Citi, like other Dublin hotels, reports continued growth in visitor numbers, particularly from Europe, the United States and Canada.

Mr Spring said the new owner will be capturing strong rental income, underpinned by experienced operators, and the opportunity to own a strategic piece of Dublin streetscape.