Schuh shop on O’Connell Street goes on sale for €8m

Changes at Clerys and Hammerson sites expected to benefit the street 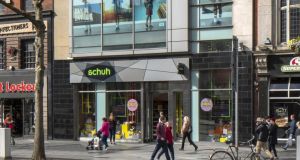 With a range of improvements on the way for Dublin’s O’Connell Street, Iput Property Fund has made a timely move to sell the successful Schuh footwear store at 47-48 O’Connell Street. Fiona Kennedy of CBRE is quoting in the region of €8 million for the high-profile building, which will give the new owner a net initial yield of 5.51 per cent.

The Schuh store is located between O’Connell Bridge and Henry Street, opposite Clerys department store, which is to undergo a partial change of use to accommodate retail, office, restaurant and bar, and a 176-bedroom hotel.

The four-storey, over-basement Schuh building has an overall floor area of 907sq m (9,761sq ft), including 183sq m (1,976sq ft) on the ground floor and a further 130sq m (1,399sq ft) of retail space at first floor level. The 25-year lease has more than seven years to run and currently produces a rent of €480,000. The lease provides for five yearly upwards-only rent reviews.

Schuh operates 118 stores across the UK and Ireland. There are 10 stores in the Republic, including six in Dublin.

The recent opening of the cross-city Luas has boosted pedestrian flow between the north and south inner city and generated considerable extra pedestrian traffic along O’Connell Street.

Kennedy said she expects strong levels of interest in the Schuh investment because of its favourable trading location and the secure income from an established retailer.

The redevelopment of the Moore Street area and the creation of a “new quarter” in the north inner city has moved a stage closer since it was acquired by developer Hammerson. The Selfridges Group has also announced a €10 million refit of its newly acquired Arnotts department store on Henry Street.

Schuh was one of three city-centre retail properties bought by Iput from the Construction Workers Pension scheme in March 2015 for an all-cash consideration of €21.3 million.

A figure of about €7.5 million was attributed to the Schuh store, while the balance of the payment was for the 69 Grafton Street, then occupied by women’s fashion trader Vera Moda, and 16 Henry Street, rented by US video game giant GamesStop.