Nama to sell off north docklands site on 5.9 acres for €110m 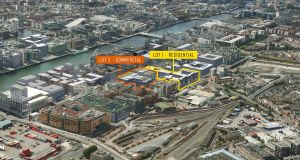 The selling agents have, alternatively, put a valuation of €45 million on the 1.44 hectares (3.55 acres) allocated for the apartments and €65 million for the 0.95 of a hectare (2.35 acres) set aside for a predominately office scheme.

City Block 3 (CB3) is located at the rear of the successful Dublin Landings office and apartment development and has frontage on to Upper Mayor Street, Castleforbes Road, New Wapping Street and Upper Sheriff Street.

The Ballymore/Oxley partnership handling the Dublin Landings project is expected to monitor the new development opportunity along with the Ronan Group,Blackrock and the TIO-Nama partnership, which are all presently developing adjacent buildings in the docklands. Kennedy Wilson, Marlet and Cairn may also be in competition for the planned project.

The apartment element, designed by O’Mahony Pike, will have 340 apartments (103 one-beds, 191 two-beds, and 46 three-beds) and seven three-bed houses. The planning permission was secured in advance of the publication of new apartment design standards, which could trigger a density of between 400 and 450, depending on the mix and layout.

The commercial element designed by Reddy Architecture will see the development of three substantial blocks of offices with a total of 30,890sq m (332,497sq ft) and some retail space at ground-floor level.

The selling agents said developers looking at CB3 would be encouraged by the performance of the central Dublin office market in 2017, when five lettings were completed at more than 9,290sq m ( 100,000 sq ft). Recently, Dublin Landings completed a 25-year letting of more than 13,000sq m (140,000sq ft) with the National Treasury Management Agency at a headline rent of around €50 per sq ft.

Cushman & Wakefield and Savills described CB3 as “the most readily developable sites within the city centre in a highly sought-after location to both live and work”.

The docklands site was originally assembled in the early 2000s by Liam Carroll of Danninger and Zoe Developments, two of the early companies to be put into receivership following the property collapse.

The statutory receiver is David Carson.