Also: Longbridge House in Belfast and a coffee shop in Donnybrook 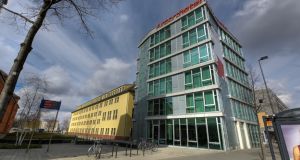 A group of investors assembled by agents Bagnall Doyle MacMahon has sold a 113-bedroom hotel in Adlershof on the outskirts of Berlin for €15 million.

The hotel was purchased in 2015 for €5 million with equity of €1.6 million. It has planning consent to convert it into student accommodation because it adjoins the University of Humboldt. The sale will show a gross return on investment of 500 per cent for the investors.

Brian Bagnall of Bagnall Doyle MacMahon described the German investment as a “strategic buy”, The hotel is sandwiched between the university and the new, under-construction Allianz European headquarters, which will extend to 60,000sq m (645,840sq ft).

“Aldershof is also only 7.5km from Berlin Airport,” he added. “And with the latest report suggesting a 2020 opening, we felt this was a well-placed investment to capitalise.”

The estate agency has been involved in buying property for investors for some time and is actively looking at opportunities in both Ireland and Germany.

Refurbished Belfast office block signs tenants
Savills and law firm Davidson McDonnell are to take space at Longbridge House in Belfast during the second half of 2018.

Longbridge House on Waring Street was bought by developer Wirefox in May 2016 and has been refurbished to include three floors of Grade A offices over ground floor restaurants.

Savills, whose office team in the city has grown from two to 20, is relocating from Lesley Studios on May Street, where it has been based for 13 years.

The penthouse floor of 520sq m (5,425sq ft) is the last available space to lease in the building.

Coffee shop in Donnybrook guiding €1.8m
Ben Pearson of Agar Commercial Property Consultants is guiding €1.8 million for a well-located coffee shop at 77 Morehampton Road, Donnybrook, Dublin 4, which is for sale by private treaty and may end up as a personal pension plan.