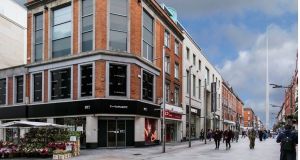 Therapie Clinic, the leading laser, skin and body treatment specialist, is to open a new flagship store at 52 Henry Street, Dublin 2. The company is believed to be planning to occupy all four floors and basement, which extend to more than 370sq m (3,993sq ft).

The building has been acquired on a sub-lease at a rent for about €250,000. The building was previously occupied by Mac Cosmetics.

Bernadine Hogan of CBRE, who handled the letting, said the layout and configuration of the stores were adaptable to suit occupier requirements, more so than those on Grafton Street.

“With the new Luas connections now in operation we are also seeing better permeability from south side shoppers,” she said. “We believe the north side of the city will see great positive transformations over the coming years.”

A well-located residential stud farm with long-term development potential on the edge of Newbridge, Co Kildare is expected to attract bidding from equestrian enthusiasts, horse-racing followers and property investors when it goes to auction on July 5th.

Jordan Auctioneers is guiding €1.3 million for the 93-acre Hawkfield House Stud, which is located only 700m from zoned land that recently received planning permission for 361 residential units. The farm is within 1.5km of the commuter rail station to Dublin, 2.5km from Newbridge town centre, and 40km from Dublin city.

A low-value office investment is about to be offered for sale through Lambert Smith Hampton. The agency will be seeking in excess of €200,000 for an office suite extending to 100sq m (1,076sq ft) at Cornelscourt, Dublin 18, which is let on a 10-year lease from March 2013. The current annual rent of €16,000 will show a net initial yield of 7.4 per cent.

The third-floor office facilities in the Grain Store in the Dublin docklands has come on the letting market through Murphy Mulhall. The agency is quoting a rent of €592 per sq m (€55/sq ft) for an office area extending to more than 218sq m (2,355sq ft), which comes with LED lighting, CAT 6 data cabling, gas central heating and air conditioning.

The Grain Store is located on the corner of South Princes Street and South Gloucester Street at the western end of the docklands. Rebecca Breen of the letting agent describes the building as “cool and contemporary and ideally suits an occcupier in the tech/creative/digital sector”.