Hazelbrook Square in Churchtown expected to show gross return of 5.6% 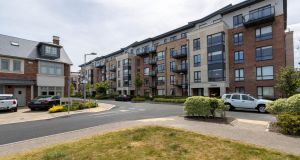 Another Dublin apartment development goes for sale this week on the instructions of receiver Mazars. Selling agent Cushman & Wakefield is guiding €16 million for a mix of 54 apartments at Hazelbrook Square, Churchtown, Dublin 14, which are expected to show a gross return of 5.6 per cent.

The eight-year-old apartments are part of some 97 residential units developed alongside 69 houses, with a further 27 houses due to be built in the next phase. The homes going for sale in a single lot comprise 22 one-bedroom apartments, 28 two-bedrooms and four three-bedrooms, which bring in a rent roll of €896,000.

Hazelbrook Square is close to the Luas Green line and the M50 motorway. The apartments are also well served by a variety of bus routes.

Harris said the lot size was likely to appeal to a considerable number of investors because of the convenience of the Churchtown address, the attractive income profile and strong reversionary potential.