Company employs 250 staff and is embarking on £38m expansion programme 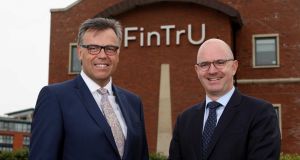 Alastair Hamilton, CEO of Invest NI and Darragh McCarthy, CEO of FinTrU. The company is to create 600 jobs.

An award-winning financial services company, founded by an entrepreneur from west Cork, is to create more than 600 new jobs in a £38 million (€43 million ) expansion programme in Northern Ireland.

Fintru, which was set up by Darragh McCarthy in 2013, provides resourcing solutions for Tier 1 investment banks from London to New York, Tokyo, Frankfurt and Paris.

The company currently employs 250 staff across its two Belfast city centre offices and in Derry. It now intends to establish a new facility in Derry, which will create an additional 305 jobs, and expand its Belfast operation by recruiting a further 300 people.

Mr McCarthy said on Tuesday its Belfast office had been “hugely successful” as a result of the “exceptional talent we have been able to recruit in Northern Ireland” and he was looking forward to repeating the experience elsewhere.

“We are delighted to continue our expansion in other areas of Northern Ireland. After reviewing a number of locations, I had no hesitation about expanding our presence into the northwest due to the highly attractive location and the availability of talent that the region offers.

“Whilst managed as a profit-driven organisation, I see Fintru as having a social purpose to create high-quality professional employment in Northern Ireland,” Mr McCarthy added.

The UCD graduate previously held a number of senior roles at Morgan Stanley in London, Frankfurt and New York before establishing his business to provide services to assist global investment banks “navigate the ever-increasing regulatory landscape”.

Mr McCarthy is one of 24 finalists selected from across Ireland in this year’s EY Entrepreneur of the Year Awards.

“The new jobs to be recruited over the next five years will generate over £15million in additional annual salaries for the local economy.