Turnover more than doubled last year, with Dublin accounting for 90% of sales 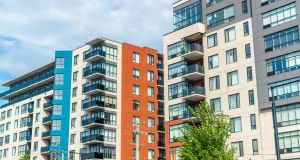 Turnover in the build-to-rent sector more than doubled last year to €2.54 billion as institutional investors piled in to the Dublin market in particular.

According to commercial property agent Cushman and Wakefield, turnover in 2019 more than doubled compared to the previous year, reaching a record high of €2.54 billion across 51 deals in the part of the market also known as the private residential sector (PRS).

In the past 12 months forward commitments accounted for about €1.3 billion, or 51 per cent, of activity, up from €531 million the previous year. Those sales comprised 2,850 homes, while the total number of units transacted last year is estimated to be in excess of 6,500.

Geographically, development has been focused in Dublin, with about 90 per cent of the spend last year taking place in the capital.

Outside of Dublin there was development in the commuter belt as well as in Cork, something which highlights the limited viability of the sector outside of large urban centres, said Cushman and Wakefield.

The average deal size last year was almost €50 million, up 23 per cent on the previous year, while eight transactions were for in excess of €100 million.

Other notable transactions included the acquisition of Project Vert by Irish investor Avestus Capital Partners for €216.1 million, and the sale of Dublin Landings by Sean Mulryan’s Ballymore to US property giant Greystar for €175.5 million. Mismatch

Demand for the build-to-rent product remained “robust” as a result of a supply and demand mismatch in the residential sector, said Patrick Hogan, head of PRS at Cushman and Wakefield.

“However, market confidence and growth are reliant on political stability and confirmation around any potential policy changes. Investors need certainty, and quickly,” Mr Hogan added.

While that certainty isn’t forthcoming, and therefore the future direction of rents remains unclear, Cushman expects rental inflation to slow further in the short term. It said that anecdotal evidence suggested a decline on asking levels at the upper end of the market.

Nevertheless, the build-to-rent sector is expected to mature in 2020, with new entrants expected in the market. “However, political and policy certainty is needed to avoid impacting existing and potential investors’ confidence,” Cushman and Wakefield said.