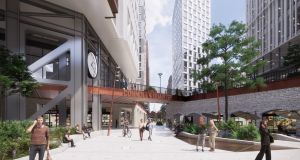 Developer Sean Mulryan’s Ballymore Group has secured the green light from An Bord Pleanála to proceed with the development of a 23-storey apartment block in Dublin city centre.

The proposed tower forms part of the wider Connolly Quarter mixed-use scheme that Ballymore and its Singapore-headquartered partner, Oxley Holdings, intend to deliver on a 2.88 hectare (7.12 acre) site adjacent to Connolly Station in Dublin 1.

In total, the developer has secured permission for the construction of 741 Build-to-Rent apartments distributed across eight blocks ranging in height from four storeys (39.6m) to 23 storeys (79.45m). The apartments will be a mix of studios and one-, two- and three-bedroom units.

The permission granted by An Bord Pleanála relates only to the residential element of the scheme. A proposal for the development of two office buildings and a hotel is set to be the subject of a separate planning application to Dublin City Council at a later date.

While the apartments at the Connolly Quarter will cater predominantly for the upper end of the private rental market, the scheme will also include 75 social homes.

Ballymore intends to provide tenants with a number of on-site amenities, including a gym, a residents’ lounge, work areas, meeting rooms, dining rooms, and a recreational area.

Mr Mulryan, Ballymore Group founder and chief executive, said he welcomed the decision to approve the development of “741 much-needed residential units in Dublin 1”.

“At Ballymore, we’re committed to true integration into the communities within which we build. The Connolly Quarter will be no different and we’ll continue to work closely with the local community as we develop the Connolly Quarter.”

Ballymore’s masterplan for the scheme envisages the creation of more than 1,000 jobs for five years. This will include training and apprenticeship opportunities at all levels which the developer says it intends to offer to the local Dublin 1 community first.

On completion, the Connolly Quarter is set to become home to over 5,000 people.

The approval of Ballymore’s plan for 23-storeys at the site comes just two days after a separate fast-track planning application was submitted by developer Joe O’Reilly’s Chartered Land for the construction of a 29-storey apartment building on Parkgate Street.

The proposed 93m (305ft) tower forms part of a major mixed-use complex Mr O’Reilly is aiming to deliver on the landmark Hickeys site. The residential element of the scheme is set to comprise 481 studio, one- and two-bed apartments distributed across four blocks ranging in height from eight storeys to 29 storeys. Some 3,698sq m (39,805sq ft) will be dedicated to office use while a further 658sq m (7,083sq ft) will be reserved for retail, cafe and restaurant space.

1 Coronavirus: Irish holding back on holiday plans
2 Bank leaked my loan request to family who tried to rip me off
3 Eason acquires rival Dubray Books for undisclosed sum
4 Solar panels: Are they worth the investment?
5 Can I see my father’s previous wills?
6 When the Chemistry no longer works – the closing of a leading Irish ad agency
7 Digicel’s earnings rise as it looks towards refinancing $1.3bn of bonds
8 Average weekly wage rose to €783 in final quarter of 2019
9 New Irish commercial property website goes live
10 Markets slump as coronavirus spreads around globe
Real news has value SUBSCRIBE