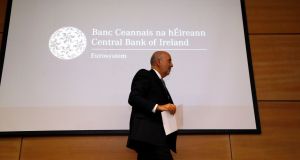 The Central Bank review of property funds is at an early stage and forms an initial stage of governor Gabriel Makhlof’s planned examination of the wider non-bank – or shadow banking – financial sector.

Irish real-estate investment trusts stand to benefit from any move by the Central Bank of Ireland to restrict non-listed property funds from offering investors access to their money on demand, according to stockbroker Davy.

British regulators proposed in December that so-called open-ended property funds, which allow for new contributions and withdrawals from investors on a continual basis, would not be able to offer investors daily redemptions without a financial penalty.

The Sunday Times has speculated that the Central Bank may follow suit, as it continues a “deep dive” examination of property funds, which was announced by governor Gabriel Makhlouf in December.

A spike in investors in open-ended commercial property funds managed by Aviva, Irish Life and Zurich prompted all three to reduce what investors could get by taking their money out – as the life insurance and pension companies repriced key funds from an acquisition to a disposal basis. Aviva went on to stop investors in its Aviva Irish Property Fund and Friends First Irish Commercial Property Fund from withdrawing their money for up to six months.

The outflows were said to be down to the high exposures of the affected funds to retail property, a segment of the market that has been under pressure in recent times amid a surge of online shopping.

“We have long been of the view that these fund structures have major flaws relative to the listed sector, where there is daily pricing, immediate liquidity, full regulation and transparency,” said Davy analyst Coin Grant.

“These funds tend to maintain cash balances of up to 20 per cent in the case of redemptions, which means that they also have inappropriate capital structures that negatively impact performance.”

Despite these issues, investors have more money in open-ended funds than listed Reits in Ireland, Davy noted.

If the Central Bank goes down the road of curbing open-ended funds, it may drive investors to switch into the listed sector and “support valuations” of Reits, Mr Grant said.

Reits operate by raising money from investors and handing out shares in return that are traded in the open market.

The Central Bank review of property funds is at an early stage and forms an initial stage of Mr Makhlof’s planned examination of the wider non-bank – or shadow banking – financial sector. The Central Bank estimates that Irish-residential investment funds hold about a third of assets in the State’s commercial real estate market.

Moves to regulate withdrawals from open-ended funds would put Ireland in line with the US and Germany, where funds that invest in illiquid assets such as property are restricted from offering daily withdrawals without forcing a penalty in investors.

The UK focus on such funds has been heightened in recent times by the implosion last summer of veteran money manager Neil Woodford’s £3 billion (€3.6 billion) Woodford Equity Income Fund, largely due to its heavy exposure to unlisted, hard-to-sell stocks. In December, London-based M&G Investments was forced to stop investors withdrawing money from its flagship property fund, after suffering large outflows.

1 Coronavirus: Property rental in the jaws of the epidemic
2 Collison brothers worth an estimated €2.9bn each
3 I want to change my will quickly in case I fall ill. Do I need a lawyer?
4 WhatsApp limits message forwarding to slow spread of misinformation
5 Kerry fintech Taxamo agrees deal with Deloitte
6 Irish back pain medical device group to pull stock market listings
7 Central Bank freeing up rainy day money could facilitate up to €16 billion in lending
8 How can the State support me now I’ve lost my job?
9 EU finance ministers hope to thrash out Covid-19 recovery plan
10 Staff in Dublin and Cork airports receive profit share and bonuses for last year
Real news has value SUBSCRIBE