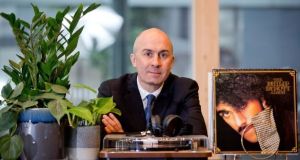 Property group Hibernia Reit negotiations over leases on the majority of its vacant office space were “advanced” as the Dublin office market saw an active fourth quarter.

It also said it expected its development at 2 Cumberland Place to be completed in the third quarter of the year, and said it was in negotiations with potential tenants regarding most of the available space.

The company made the statement in a trading update covering the period from October 1st to date.

Hibernia said it had invested €2.5 million in two acquisitions since September 30th last year. It said the vacancy rate in its in-place office portfolio stood at 12 per cent – primarily across 2WML, Central Quay and the Forum. Two rent reviews are outstanding.

“We have made good progress in lease negotiations for the majority of the space available and we expect these to start concluding shortly,” the company said.

Figures from Knight Frank show the Dublin office letting market saw take-up exceed 3.3 million square feet in 2019 as a whole, lower than in 2018, but a number of transactions remained outstanding at the end of 2019.

Hibernia Reit also carried out a share buyback during the period to November 11th, buying up 4.3 million shares for €6 million, completing the €25 million programme originally announced on April 2nd, 2019. A total of 17.6 million shares were repurchased.

“The Dublin office letting market ended 2019 strongly, with a pick-up in demand from tenants of all sizes, after a quieter period in the middle of the year, particularly for smaller occupiers. Levels of active tenant demand remain high and 2020 has started positively. Property investment market volumes set a new record in 2019, though it remains to be seen how the market reacts to the tax changes introduced in the recent budget,” said Hibernia Reit chief executive Kevin Nowlan.

“We have made good progress with the lease negotiations that are ongoing over much of the available space in the office portfolio, and we expect that these will start concluding shortly. We continue to work on advancing our development pipeline and have made two small property acquisitions to enhance the future value of the assets we already own. Hibernia remains well-positioned with an extensive development pipeline, low financial leverage and a talented team.”

The group had net debt of €229 million and cash and undrawn facilities of €166 million at the end of December 2019.