Final quarter of 2019 propelled by three deals of over 180,000sq ft in Dublin and Kildare 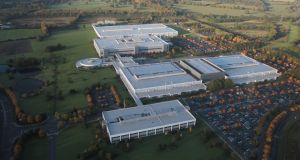 The largest industrial letting in Dublin and the greater Dublin area in Q4 2019, was at the Liffey Business Campus in Leixlip, Co Kildare. Photo: Niall Carson/PA Wire

Activity in the industrial market in Dublin and the greater Dublin area (GDA) proved to be particularly strong in the final quarter of 2019 with three deals in excess of 100,000 sq ft helping to propel total take up for the year to 3.7 million sq ft. The figure represents a 12 per cent increase on the 3.3 million sq ft recorded in 2018.

The latest report on the sector from agent JLL shows that that some 1.4 million sq ft was transacted across 50 deals in the final three months of the year. While the figure was more than three times higher than the 350,000sq ft booked in the previous quarter, it should be noted that some 776,065sq ft of the space signed for in the fourth quarter was accounted for by three major transactions.

The largest of these took place outside the capital and involved the letting of 340,332sq ft of space in Building 8 at the Liffey Business Campus in Leixlip, Co Kildare. The agreement of the deal represented a particular coup for the owners, BlackRock Real Estate Assets and developer Michael O’Flynn, coming as it did just over one year on from their €51 million acquisition of the wider Hewlett Packard campus.

The second and third largest industrial deals in the fourth quarter took place in Dublin and involved the letting of 250,847sq ft at the Harris Group’s former Naas Road complex to DHL, and 184,886 sq ft at 1 Dublin Airport Logistics Park to Geodis Ireland. Both lettings were handled by industrial property specialists, Harvey.

Commenting on the performance of the industrial market in the final quarter, Hannah Dwyer, director and head of research at JLL said: “This is a strong level of activity for Dublin and signals the continued resilience of the sector despite some external market pressures in the last 12 months. 2020 is expected to continue in the same vein, with steadiness across the sector. However, we will have to keep a close eye on the outcome of the election and any future legislative changes which may impact on the property market.”

Nigel Healy, senior director within JLL’s industrial division added: “While it was good to see such strong demand in 2019, there is some concern regarding the lack of immediately available good quality space in 2020. Naturally, there are some pipeline schemes which are capable of delivering space, but the reality is that with only seven active developers, capacity remains an issue. By active, I mean those developers who have the land, the funding, the ability to secure planning permission, and the capacity for execution.”

Commenting further on the prospects for the delivery of new industrial space in 2020, Mr Healy cautioned that some developers will adopt a “wait-and-see” approach in the short term at least. This, he said, would see a continued restriction in supply with some notable exceptions where there is already on-site activity.

While JLL expects most prospective occupiers to accept and deal with the inevitable outcomes of Brexit, the ongoing absence of clarity will, they say, continue to cause delays in the decision-making process. In summary, the agency expects 2020 to be a year marked by caution in the industrial market.