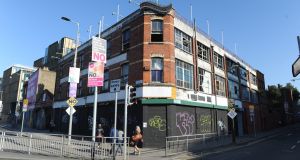 For 15 years between 1988 and 2003, the City Arts Centre on Moss Street forged a deserved reputation as one of Dublin’s most important cultural spaces.

In the 17 years since the property was sold, however, for about €4.2 million to a consortium of developers including Paddy Kelly and the Dublin-based McCormack family’s investment vehicle Alanis Capital, it has lain dormant.

With demand for sites in Dublin city centre and in the docklands still surging, the City Arts Centre site’s long-running role of derelict curiosity is about to come to an end.

This time round, it’s understood the building and its 0.22 hectare (0.55 acre) brownfield site will be brought to the market in the coming weeks by agent HWBC at a guide price of between €50 million and €60 million. The sale is expected to attract a wide range of developers and investors.

Located at the junction of Moss Street and City Quay, and with surface car parking along Gloucester Street, the property offers the prospective purchaser the opportunity to deliver an office or residential scheme at a prime location within Dublin’s central business district.

While the site is occupied currently by the former three-storey home of the City Arts Centre, the purchaser will likely demolish and replace this building with a higher and more substantial structure.

The site is flanked on either side by the recently-developed eight-storey (10,960sq m/118,000sq ft) headquarters of Grant Thornton at 13-18 City Quay and Irish Life’s newly-redeveloped 1GQ office complex at George’s Quay.

Although neither development could be replicated within the confines of the City Arts Centre site, interested parties will aiming to maximise its potential for height and density.

On June 12th, 2017, the provisions of the George’s Quay Local Area Plan (LAP) were extended for five years up to July 2022. Under the LAP, the height strategy for the City Arts site is for buildings of between six and nine storeys.

It would be open to the purchaser of the site to seek permission for a higher structure however, by referring to the urban development and building heights guidelines for planning authorities issued by Minister for Housing Eoghan Murphy in December 2018.

According to these, local authorities may assess permissible building heights on a qualitative basis, rather than by the prescriptive limitations in development plans or local area plans.

The prospects for delivering a taller structure on the City Arts Centre site are further enhanced by its location at George’s Quay. Under the Dublin City Development Plan 2016-2022, George’s Quay is one of four city gateway locations designated for developments of over 50m (164ft), along with Heuston, Connolly and the docklands cluster.

The George’s Quay and Tara Street area is already set to become the home of a number of buildings in excess of that height.