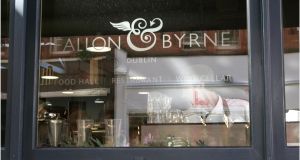 Plans by high-end retailer Fallon & Byrne to open a flagship food hall, delicatessen and restaurant at the Dundrum Town Centre in south Dublin have been placed under review.

The news comes following a period of turbulence at the business since the beginning of this year.

Only three weeks ago, the company’s founders – Fiona McHugh, the former editor of the Sunday Times Ireland edition, and her husband, property developer Paul Byrne – agreed their exit from the business in a deal with the company’s other investors.

The couple’s departure followed the sudden closure of Fallon & Byrne’s outlet at the Swan Centre in Rathmines on January 2nd.

The company’s remaining investors, former Superquinn finance chief Frank Murphy and Kildare restaurateur Brian Fallon, stated their intention at the time to focus on the expansion of Fallon & Byrne’s Exchequer Street food hall and on the continuing operation of its Dún Laoghaire outlet. They made no mention of the outlets planned for Dundrum or Connolly Station in Dublin city centre.

Asked for comment on the matter on Thursday, a spokesman for Fallon & Byrne restated that position, saying: “Fallon & Byrne is focused on expanding our innovative offering at Exchequer Street and that is where we see the most potential for growth in the short to medium term.

“This comes following the recent granting of planning permission by An Bord Pleanála for the expansion of our building at Exchequer Street. Our successful Dún Laoghaire outlet also continues to operate as normal.”

Asked specifically if Fallon & Byrne intended to proceed with the opening of its planned Dundrum outlet, the spokesman said: “All other business expansion plans are currently being reviewed.”

While the company would appear to have put its plan to locate at the south Dublin retail mecca on hold at the very least, a spokesman for Dundrum Town Centre owner Hammerson said it expects to complete the handover of Fallon & Byrne’s new premises by the end of April.

“We have signed a lease agreement with Fallon & Byrne. The new store and restaurant will be a modern interpretation of the historic redbrick cottages, providing a unique backdrop to the Pembroke Square environment,” the spokesman said.

Pembroke Square is part of the new Pembroke District dining and leisure area at Dundrum Town Centre, which is due be completed later this year. The new quarter is set to be anchored by Press Up Entertainment’s latest offering, the Stella Bowl, along with a number of new restaurants including Leon, J2 Sushi and Asian restaurant concept PF Chang’s.

Hammerson is also advancing plans to create 6,000sq ft (550sq m) of public space on Pembroke Square, which will host its own dedicated programme of events for visitors throughout the year.

Last week it was announced that Brown Thomas will be opening a new flagship store at the Dundrum Town Centre in 2021.