Barry’s Hotel comes with rooms to improve at €8m guide 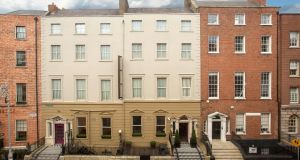 Barry’s Hotel has 22 metres of frontage to Great Denmark Street , and is located in close proximity to O’Connell Street.

From playing a leading part in the events surrounding the 1916 Rising and the War of Independence to providing the location in more recent times for Dublin’s once-thriving showband scene, Barry’s Hotel, has long been acknowledged as one of the city’s most-storied venues.

Built originally at Lord Tullamore’s Townhouse in 1780, the property was converted into a hotel in 1889, and has continued to trade as one ever since. For many years, it formed part of former Fianna Fáil senator Donie Cassidy’s Dublin hotel portfolio, and served as the venue for what became known for many years as “nurses’ dances”.

While those dances have long since come to an end, Barry’s continues to trade profitably as a 33-guestroom townhouse at 1-2 Great Denmark Street, at the heart of Dublin city centre.

The hotel’s potential for the future however probably lies in the approval given by An Bord Pleanála in 2019 for the development of a 32-guestroom extension to the rear of the property.

That planning permission is expected to spur significant interest from investors and hotel operators now that the hotel has been brought to the market by agent JLL at a guide price of €8 million. The subject property is being offered for sale as a going concern with freehold title and vacant possession.

“Barry’s Hotel is full of history and it holds memories for many across the city. It has a long and eventful history, including playing a leading part in both the 1916 rising and the War of Independence when it was occupied by numerous Irish leaders, including Éamon DeValera and Michael Collins. Indeed, Michael Collins is thought to have fired gun shots from the windows of Barry’s Hotel during the fighting.

“In the dance and cabaret era of the 1950s to the 1980s, the extensive ballroom at Barry’s Hotel hosted Irish showbands and singers.Lastly, its convenient location to Croke Park, means that the hotel will also be well known to GAA fans visiting the stadium only 900 metres away.”

“The existing profitable business, along with the potential to double the current guestroom stock, is a rare find and it is therefore expected to attract significant buyer interest”.