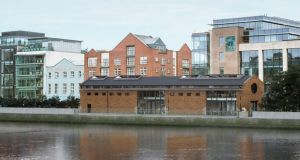 81A Campshires, a building restored by Denis O’Brien, achieved a rent roll of €72 per square foot.

In a note to clients, analysts Colm Lauder and Eamonn Hughes forecast headline rents of €65 per square foot, near 2008 levels, to remain this year on the back of continued occupier demand, despite a pick-up in supply levels.

The pair noted, however, that some unique buildings or landmark buildings have achieved a higher rent roll than that, with 81A Campshires, a development owned by Denis O’Brien, achieving €72 per square foot for 3,700sq ft of space. Meanwhile, in One Ballsbridge Place, 3,000sq ft, went at €70 per square foot.

Those higher rents could be down to the fact that “longer leases may prove unnerving for international corporates who favour flexibility”.

For investors, Goodbody notes that Ireland remains one of the strongest performing globally, with returns from Dublin offices “still in double-digit territory, despite a moderation in the rate of growth as rents and yields settle following a rapid value recovery”.

Goodbody’s report comes in the wake of a number of commercial outlooks suggesting that rent per square foot will increase this year. Real-estate company Lisney said the continuing increase in office rental prices is forcing Irish companies to consider locations outside of Dublin’s city centre. They noted that Facebook and Google will occupy 38,500sq m and 74,600sq m respectively in the capital by the end of this year, or 4 per cent of all commercial office space.

Both Lisney and CBRE, another real estate company, forecast heightened leasing activity in Dublin’s suburbs “as occupiers move some functions of their business to more cost-effective locations”.