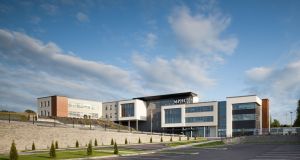 Mallow Primary Healthcare Centre opened in 2010 in a state of the art facility that was seen as a template for this type of development. Photograph: Donal Murphy

Mallow Primary Healthcare Centre in Co Cork has been sold to a specialist UK healthcare investment trust for €20 million. The off-market deal reflects a net initial yield of almost 6 per cent.

Mallow Primary Healthcare The listed buyer, Primary Health Properties (PHP), is advised in Ireland by Fintan Tierney of Tierney Chartered Surveyors and has committed €150 million to building a portfolio of primary healthcare facilities in Ireland. It plans to do this through acquisition or prefunding the development of such centres.

PHP owns 304 primary healthcare properties in Britain and three in Ireland. The fund holds assets valued at £1.35 billion (€1.52 billion) with a rent roll of £73 million (€82 million) per annum.

Mallow Primary Healthcare Centre opened in 2010 in a state-of-the-art facility regarded as a template for this type of development.

The bulk of that rent comes from the Health Service Executive which is to occupy 3,716sq m (40,000sq ft) shortly under a revised 25-year lease, at a rent of €824,000 per annum. This is subject to rent reviews every five years in line with inflation.

There are three GP practices in the building which pay a combined rent of €340,000 per annum while what’s called the “4th Practice” pays a rent of €55,500 per annum.

Mallow Primary Healthcare Centre was developed by the principals of three leading GP practices in Mallow.

These practices remain separate but, by being co-located and through collaboration and sharing of diagnostic facilities, can provide a high level of service to their patients.

The principals of the three GP practices collaborated recently to open the “4th Practice” which provides specialist services not usually available to general practitioners in Ireland.

This has allowed the GPs to offer enhanced joint care clinics in seven consultation rooms/suites as well as a minor surgery suite, a diagnostics suite and a research and education suite.

Part of the Government’s health strategy is based around supporting the development of primary care facilities as it seeks to ease pressure on public hospitals which will then focus on acute healthcare.

Harry Hyman, managing director of PHP, says the primary healthcare market in Ireland offers “significant potential due to the need to modernise the primary care infrastructure and widen the provision of healthcare services”.