Core Industrial to include property in Dublin locations Rathcoole, Clondalkin and Finglas 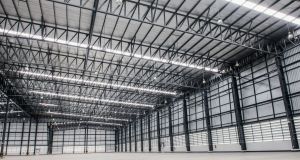 US hedge fund York Capital is planning a €250 million initial public offering of an Irish industrial and logistics property investment trust called Core Industrial Plc in Dublin in the coming months, according to sources.

The New York-based fund, which has about $20 billion (€16.3 billion) of assets under management, plans to put about €80 million of industrial units into the quoted company, they said. This includes property in locations like Rathcoole, Clondalkin and Finglas in Dublin that it snapped up after the property crash.

Other York Capital “seed assets” being lined up for the company include industrial and logistics holdings in Naas and Kilcullen in Co Kildare and Clonee in Co Meath.

The industrial sector emerged last year as the hottest area of the Irish commercial property market, delivering total returns of about 14.5 per cent for the 12 months to the end of September, according to the MSCI Ireland Property Index. That compares with a 10.5 per cent return during the same period for the office market, which initially led the real-estate recovery after the crash, and 10.8 per cent for the retail investment sector.

Green Reit, which in 2013 became the first real-estate investment trust to list in Dublin, said in its latest annual report that rental yields in the prime industrial and logistics sector remained stable at 5.5 per cent in the first half of 2017 and accounted for 8 per cent of total commercial property investment in the Irish market.

While prime rents in the industrial and logistics segment of the market continue to increase, there is limited speculative development in this area, the report said.

“While Brexit negotiations are at an early stage, it is felt that it may result in increasing demand within the industrial and logistics sector, due to likely changes to the UK’s trading arrangements with the EU,” it concluded.

Credit Suisse, which acquired a 30 per cent stake in York Capital in 2010, is advising on the flotation, along with Davy in Dublin, according to sources. While the promoters of the deal are currently pitching to raise between €200 million and €250 million, there is a view that the deal could be increased, as the Core Industrial executives see capacity for more than €500 million of industrial and logistics asset purchases.

Core Industrial was incorporated at the end of November. AIB has since provided debt financing for the seed assets, according to documents filed with the Companies Registration Office. A spokesman for the fledgling company declined to comment.

The company has a named third director called Diego Arroyo Ornelas, who is a vice-president with York Capital in London and whose focus is on “event-driven European distressed credit”.

Elsewhere, leading Irish retail asset manager Sigma Retail Partners, headed by former Nama adviser Marcus Wren, is said to be exploring the flotation of a new retail-focused real-estate investment trust. Sigma is reportedly due to take over the management of the Square Tallaght shopping centre once US private-equity group Oaktree completes its €230 million acquisition of a controlling stake in the south Dublin mall.