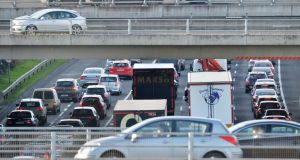 A sudden drop-off in corporation tax receipts could result in a €26 billion hit to the Irish economy and a “prolonged deterioration” in the Government’s finances, the Economic and Social Research Institute (ESRI) has warned. Eoin Burke-Kennedy has the details.

The Irish economy could be in for a Brexit bounce if UK prime minister Boris Johnson secures a majority in this week’s UK election, ESRI has said, writes Eoin Burke-Kennedy.

Bank of Ireland’s new mobile banking phone app will go live for a “small” group of staff by the end of the year, but a broader roll-out of this key project in its €1.15 billion IT overhaul has been delayed until next year. Joe Brennan reports.

Food-ordering start-up Flipdish is to roll out digital self-service kiosks to restaurants across the State to help reduce waiting times and provide a better customer experience, writes Charlie Taylor

The majority of potential claimants in the case of Custom House Capital (CHC) are yet to receive compensation, some eight years after the broker was found to have misappropriated about €66.5 million from customers, Peter Hamilton reports.

A group of local investors in the Glendalough Distillery in Co Wicklow are set to share in a windfall of about €12 million from the sale of the remaining 60 per cent of the whiskey and gin maker to Mark Anthony Brands International, a Canadian-owned spirits group, writes Ciarán Hancock

A new multimillion euro early-stage fund for technology companies that is backed by a number of Irish tech veterans and several institutional investors, has reached a first close, having raised €23 million. Charlie Taylor reports.

Celtic Pure, the Co Monaghan water company which was earlier this year at the centre of an arsenic scare, has fallen into liquidation after no investment was secured. Peter Hamilton has the details.

Marie Boran on how facial recognition technology has become latest woe at the National Children’s Hospital.

Chris Horn tells us that we need to become a no-commute society.

The e-ticket is taking over the world, Ciara O’Brien informs us and she also reviews the Huawei Watch GT 2.

What will the office of the future look like? Fiona Alston has some ideas.

Our exclusive Inside Business podcast hears that the developers of the former Central Bank headquarters on Dame Street in Dublin and neighbouring buildings will spend €100 million renovating them as a mix of offices, retail, restaurants and cafes.

1 How much state pension will I get next year?
2 Oxford Covid vaccine trials offer hope for elderly
3 Tesco takes to the skies with home delivery by drone
4 Hurrah for the companies giving staff more time off
5 Ulster Bank to introduce new card payment controls on app
6 How long can Government afford to keep State pension age at 66?
7 Investors unnerved by Brexit, Covid-19 and US election jitters
8 Apple planning updates to its AirPods earbuds next year
9 Covid-19 will worsen shortage of accountants, says CPA Ireland
10 Fair deal? Family at odds with hospital and each other not so sure
Real news has value SUBSCRIBE