Chris Horn: We need to adopt a no-commute culture 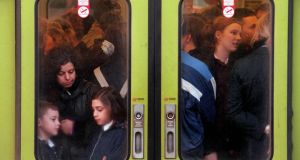 If employees come into work to use the company software and data in the cloud whilst sitting in their office, then why do they need to come into work? File photograph: The Irish Times

When I was a software chief executive, my mentor strongly coached me to “invest in ideas, not materials”. He asserted that creativity and invention, insight and imagination were highly prized.

Our investors expected that we would continuously innovate to successfully bring new products to the global stage. He warned me that our shareholders frankly would be incredulous if we instead invested in material assets such as buildings or even expensive computers.

To the extent that we needed physical space or computing power, we should seek to rent rather than to acquire. His conclusion was that any tech company that invests in physical assets rather than in invention has clearly lost its way, and is stagnating.

Renting time on expensive server computers was not always an option in the last millennium. But in the last decade, cloud computing has dramatically changed the running of companies. Instead of owning expensive machines, companies can pay as they go for computing time and easily scale their use with the growth of the organisation.

In a tight labour market with a public highly attuned to climate change, no-commute jobs may rapidly become the only way to attract and retain a skilled workforce

Cloud computing enables any staff member to access software and data resources from anywhere, provided of course that there is a reasonable internet connection. Given that many functions of a business infrastructure – email and messaging, sales management, marketing programmes, customer care, engineering planning, product design, and general office administration – can now all be provided using cloud computing, then in principle many staff can do their jobs from any location.

But if employees come into work to use the company software and data in the cloud whilst sitting in their office, then why do they need to come into work? Could they not equally do so from home, or shared hubs much closer to where they live?

As the decade closes, a second major change to the running of companies may become even more dramatic than cloud computing. Climate change is impacting our lives, both family and business, in ways which we scarcely considered way back at the start of the decade in 2010. Allegiances to certain products and to food styles are changing. Recycled materials are becoming much more the norm than ten years ago. Carbon emissions in transportation and supply chains are becoming a deep public concern.

Consumer pressure for addressing climate change can only increase in the coming decade. Single use materials, and plastic wrapping are becoming unacceptable. The carbon emission costs of the manufacture of products and production of foodstuffs are being documented. Every new product will soon not be measured by how much of it can be recycled at the end of its life, but instead at its start of life, what proportion of it is made from recycled materials?

Cloud computing and climate change are challenges for Ireland. In August, the Irish Academy of Engineering noted that while data centres accounted for less than 5 per cent of our national electricity use in 2016, by 2027 this could credibly rise to 31 per cent. Hosting cloud computing centres here in Ireland for users across the planet could add considerably to our national carbon emissions, unless we can accelerate the switch of our national grid from fossil fuels to renewables.

Could the disproportionate climate change costs for Ireland of hosting data centres here on behalf of other countries nevertheless be offset by reduced carbon emissions as a result of exploiting cloud computing across our economy?

The solution is quite obvious: exploit our leadership in hosting cloud computing to switch our economy away from urban concentration instead to minimal or even no-commute, and to work from or close to home.

Rather than the carbon emissions of literally hundreds of thousands of commuters; rather than the intense pressure on urban planning, housing and on personal lifestyle; and rather than investing heavily in yet further major infrastructure arteries, should we not now rapidly foster a national culture of no-commute whenever possible? The improvement in our national quality of life would be truly transformative, and benefit across all our society.

Many of our teenagers and younger children are pressing for urgent action on climate change. In the coming decade, many of these will enter our labour force for the first time. We should anticipate that they demand a no-commute workstyle as a prerequisite for their employment.

In a tight labour market with a public highly attuned to climate change, no-commute jobs may rapidly become the only way to attract and retain a skilled workforce.

One of the ironies of cloud computing is that the technology giants which have so successfully led cloud computing into the mainstream of business practice, have apparently yet to fully embrace the benefits of it themselves.

Why is Facebook investing heavily in building a 14-acre physical campus in Ballsbridge to where its staff will commute to use Facebook’s own cloud computing systems?

Why is Google is doing deals for the Treasury Building, Bolands Quay, the Sorting Office and other locations, so its staff commute into Google offices to use Google’s internal cloud? Microsoft and Amazon are world leaders in cloud computing: why is it really necessary for their staff to have to commute to their offices anymore?

Maybe my mentor was correct: investment in physical assets is often a sign of a tech company running out of new ideas.