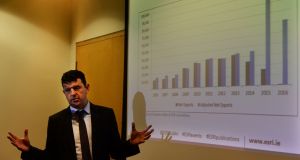 Kieran McQuinn at the ESRI forecast for 2017 and 2018. In its latest economic commentary, the institute examined the impact of a sudden reduction in business tax receipts on Ireland’s macro economy and on the Government’s finances. File photograph: Cyril Byrne

A sudden drop-off in corporation tax receipts could result in a €26 billion hit to the Irish economy and a “prolonged deterioration” in the Government’s finances, the Economic and Social Research Institute (ESRI) has warned.

The think tank said as much as €6 billion of the Government’s €10 billion corporation tax base could be “temporary” and therefore posed a significant threat to the exchequer, echoing a similar warning from the Irish Fiscal Advisory Council last month.

In its latest economic commentary, it examined the impact of a sudden reduction in business tax receipts on Ireland’s macro economy and on the Government’s finances.

A “sharp” €6 billion outflow would push up Government borrowing costs and related interest rates throughout the economy, which would in turn dampen investment and consumption, it said.

This could reduce gross domestic product (GDP) by €26 billion or 7.5 per cent in the first year of the shock, the ESRI said. Over 10 years, the negative effect was estimated to be about €16 billion a year.

Under this scenario and assuming no corrective policy action, the Government would be forced into running a budget deficit of 2.5 per cent in the first year, narrowing to 0.2 per cent in year 10, instead of a budget surplus. Its debt to GDP ratio would also deteriorate.

Even a “moderate” €2 billion decline in corporation tax receipts would hit GDP by as much as €8 billion in the first year and by €5 billion per year over the longer term as well as leaving the Government with smaller budgetary surpluses than it otherwise might have had.

“The results of the analysis highlight the vulnerability of the Irish public finances to significant variations in these receipts,” the ESRI said.

The rapid increase in corporation tax receipts here since 2014 has been linked to the on-shoring of assets by a small number of large multinationals.

While the ESRI did not speculate on the likelihood of a major outflow in receipts, it noted that corporation tax was more prone to changes in international economic conditions.

It also said the highly concentrated nature of Ireland’s corporation tax base with about 50 per cent of receipts coming from just 10 large firms posed an inherent risk in itself.

In its latest assessment, the ESRI said the Irish economy looked set to register strong growth again in 2019 with GDP likely to increase by almost 6 per cent.

“While certain multinational-related transactions are distorting the headline figures, the large increase in taxation receipts and the continued strong performance of the Irish labour market means the underlying economy is performing well,” it said.

However, it warned that the Brexit process has “merely been parked” and that the possibility of protracted free trade negotiations between the UK and the EU next year would “result in further uncertainty”.