Gradual death of the paper ticket

Smartphone e-tickets are becoming the norm for gigs, sports events and flights 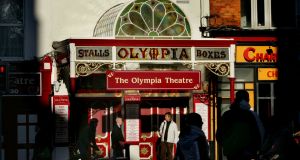 A recent gig with no paper tickets was a new milestone for the Olympia and Ticketmaster. Photograph: Kate Geraghty

When English artist Rex Orange County played two sold-out concerts at the Olympia in Dublin a couple of weeks ago, there was one thing immediately obvious from the long queue of people waiting to get in: none of them had a paper ticket.

It was a new milestone for the venue – and for Ticketmaster. All tickets were mobile only, meaning anyone wanting to enter needed the ticket on their mobile phone, inside the Ticketmaster app.

Paper tickets are falling out of fashion, made redundant by the ever-present smartphone. Boarding cards, train tickets, bus tickets and even concert tickets are all going digital, sitting on your smartphone in a digital wallet alongside your bank cards and loyalty cards.

Aircoach, for example, now offers tickets within their app; airlines have almost all shifted to providing the option of mobile boarding passes, for at least some of their destinations. And while there are many reasons why digital tickets are not a great idea – a lack of facilities, bad internet access, a dead battery on your mobile phone – it seems one advantage may eventually trump them all: convenience.

“This is the first event that we categorise as 100 per cent digital,” said Keith English, managing director of Ticketmaster Ireland.

It’s not the first time the Olympia has been at the forefront of a ticketing revolution. When Ticketmaster began offering its Print at Home tickets in Ireland – PDFs you print in lieu of a ticket being posted to you – the Olympia was the first venue to accept them. But over time, the company noticed that people were bringing the tickets in on their devices, screenshooting the barcode to present for scanning.

It took a while for the shift to really happen, and for Ticketmaster to officially offer digital tickets. although the move to paper-free is very much a Ticketmaster aim, English said.

“There are a few reasons why we’ve gone down the path of digital ticketing. The obvious one is convenience for the patron. Instant fulfilment is what a lot of people want these days; we sell you a ticket and you’re dealing with instant delivery.”

This event had been carefully chosen – one that would have an age profile suited to using mobile apps instead of paper tickets – ie a younger age group. Attendees at Rex Orange County definitely fit that bill. English acknowledged that it wouldn’t suit every event or every patron. Still, the company is optimistic that people attending events with tickets sourced through Ticketmaster will embrace it.

“Now you’ve got this ticket on your phone, it’s not like a piece of paper. It’s a living thing we can see once we’ve dispatched it out,” he said.

For consumers, there are several advantages. There is the instant delivery element; tickets are simply there. But if you need to send them on to someone else, tickets can be easily transferred via the Ticketmaster app. It disappears from your account as it lands in the recipient’s.

That means no more handing out tickets, no more lost tickets and it cuts down the risk of presenting an invalid ticket when you get to an event. It will also means a lot more users for the Ticketmaster app.

There’s also a fan resale element, English explained. “We allow people to resell tickets for shows at the price that they pay,” he said. “It’s leveraging the same stuff as the transfer. There is money movement going on in the background between the buyer and the seller.”

While it may not eliminate touting, it will in part answer criticism of Ticketmaster’s role in reselling tickets to its own events. In August last year, the company said it would shut down its Seatwave ticket reselling site, and promised a fan-to-fan ticket exchange site instead.

Tickets sold through Ticketmaster’s app can only be sold for the price you paid for them. It won’t stop people selling outside the app, but it is another way to make things more difficult for touts. For example, organisers can choose to only allow transfers in the day or two before the event, so they can’t be sold on to a third party within minutes of being purchased.

There are other reasons fans may prefer to use the app, however. To gain entry, the ticket has to be active; a banner across the top of the ticket moves within the app, but if a ticketholder presents a screenshot of the ticket – which would not include that active element – the ticket will be rejected. That means a seller can’t screenshot the ticket and sell it to multiple people, cutting down the likelihood of being scammed with a fake ticket.

There are advantages of the digital tickets from the organiser’s point of view. Not only can they control what happens with the tickets – allowing them to be transferred only after a certain date, or invalidating them if necessary – but it can also see who is attending.

The cloud-based access control system gives organisers a live view of what is going on in real time. Event attendees are scanned in as they arrive, the same as with paper tickets. But the cloud system shows how many people are in the building, statistics on throughput rates, what seats are occupied – and more importantly, how many have yet to arrive. If someone needs to leave temporarily or permanently, the barcode is scanned again and that is reflected in the cloud system.

The new digital ticketing platform is one that has already been used in the US for NFL football games, proving it can handle large volumes of tickets.

Ticketmaster isn’t the only company hoping that digital ticketing will become the norm. Irish technology company Tixserve has developed its own product that not only allows venues to take digital tickets, but also provides an opportunity for marketing too.

It has signed up England’s Rugby Football Union to use its service, providing a secure digital ticket delivery system for Twickenham stadium. The company won the contract through a public tender process.

Its interactive digital ticket delivery system, which works through a smartphone app and is similar to Apple Wallet, prevents unauthorised resale or exchange of tickets and opens up opportunities for companies to engage with customers and market products and services to them.

The system can provide vital information, such as maps and directions to the stadium with transport details and deliver match-day, real-time updates.

It essentially offers a white-label solution for entertainment and sporting events and enables the secure delivery of interactive digital tickets on behalf of its business clients – event creators, venues and rights owners – with unique customer engagement, marketing and commerce opportunities.

That, Tixserve’s Pat Kirby said, was a big driver for the RFU. “Sponsorship is a big chunk of their income.”

The company is now talking to other sports organisations in a bid to expand its platform further. “We were trying to establish our credibility and credentials with flagship clients in the UK,” said Kirby. While it is still adding to those big-name clients, it isn’t ruling out taking the solution to smaller clubs, giving them a way to reach their customers and keep track on attendances.

One important thing digital tickets give to event organisers and venues is data: data on who their customers are, who is attending and a way they can communicate with them.

That won’t suit everyone, with consumers becoming increasingly aware of their privacy and how much data they are sharing with third party companies. It doesn’t appear that Ticketmaster is going to bring the mobile-only tickets as a mandatory thing for every event – good news for people who find themselves out of battery on their mobile phone at the last minute, or those who don’t have access to consistent broadband connections – but the company is hoping that event-goers will take to them.

“In [the Olympia], we have a mix. You decide as the consumer whether you want to have a digital ticket or a paper ticket, but organically, we’re seeing past 60-65 per cent on a regular basis, so it’s what consumers want,” English said. “Some of the other venues like Vicar Street, we’re seeing percentages around the 35-40 per cent mark; Bord Gáis Energy maybe 20 per cent. So it’s slowly building, and we haven’t really promoted it.”

The application that the Irish venues are using will be run from a European data centre, Ticketmaster said.

But digital systems – particularly ones that rely on wifi – are fallible, particularly if the wifi signal is patchy. Lose the connection inside the venue and what happens? According to Ticketmaster, attendees can keep coming through the doors, and the system will update as soon as it reconnects.

“One of the next evolutions we’re probably going to go to is the barcode piece is probably going to disappear and we’re going to start talking about NFC (near-field communications),” said Ticketmaster’s English. That will require a change in infrastructure for some venues, but the company is already looking at a project with Thomond Park where new turnstiles will read the existing QR codes but also communicate with mobile phones when presented, giving ticket holders access.

While concerns about the dominance of smartphones in our everyday lives will continue to be raised, it seems that we can’t stop digital from infiltrating.

1 Who are Ireland’s 17 billionaires?
2 Ireland has fifth-largest number of billionaires per capita in the world, says Oxfam
3 Ireland ranked second in Europe for data breach notifications
4 Tullow Oil expects write-offs of $1.5bn
5 Ireland has an ‘accommodation crisis’, not a housing crisis
Real news has value SUBSCRIBE