Irish economy in line for Brexit bounce if Johnson gets majority 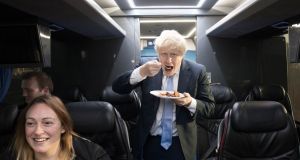 The ESRI says Ireland could benefit if Brexit uncertainty is removed in the short term. UK prime minister Boris Johnson is hoping to secure a parliamentary majority in Thursday’s election. Photograph: Stefan Rousseau/PA

The Irish economy could benefit from a Brexit bounce if British prime minister Boris Johnson secures a parliamentary majority in this week’s UK election, the Economic and Social Research Institute (ESRI) has said.

“If the Brexit issue is resolved in the short term there may be a bounce associated with that,” the ESRI’s Professor Kieran McQuinn said at the launch of the think tank’s latest quarterly commentary.

Mr Johnson gambled on an early election in an attempt to win a majority, which would allow him to bring his Brexit deal into law and take the UK out of the European Union by the end of January next year.

“If sentiment suddenly starts to improve again it could be that you’ll see a pick up in consumption and some of the underlying investment categories,” Prof McQuinn said.

While economic growth and employment here has remained strong despite the Brexit uncertainty, business and consumer sentiment deteriorated in the second half of this year with the election of Mr Johnson as prime minister and the increased risk of a no-deal outcome to the Brexit negotiations.

Prof McQuinn, however, warned that the lift from a Brexit agreement could be short-lived if free trade negotiations between the EU and the UK prove bumpy.

“There’s a real potential Pandora’s box there, all sorts of difficulties could arise,” he said. “There could be both inter and intra country difficulties arising from these negotiations,” he said, suggesting the unified stance of the EU may come under pressure.

In its latest assessment, the ESRI described the “persistent growth”of the Irish economy as “remarkable” given the strong headwinds observed in 2019, the uncertainty about the Brexit process, and the moderation observed in global conditions.

It warned, however, that the Brexit process has “merely been parked” and that the free trade negotiations between London and Brussels would almost certainty result in more uncertainty.

“While the most recent agreement reached between the UK government and the EU does appear to have averted a no-deal exit in the short term, the stated preference of the UK for a free trade agreement over the longer term will give rise to some difficult choices for both domestic and European policymakers in the years ahead,” it said.

The ESRI forecast the Irish economy would grow by close to 6 per cent in gross domestic product (GDP) terms this year before softening to 3.3 per cent next year.

“While certain multinational-related transactions are distorting the headline figures, the large increase in taxation receipts and the continued strong performance of the Irish labour market means the underlying economy is performing well,” it said.

It predicted the unemployment rate here to average 5 per cent in 2019 and fall to 4.6 per cent in 2020. Against this backdrop, it said Budget 2020 proved to be a “broadly prudent package” with relatively few changes in personal taxation rates.

In its report, the institute examined the regional diversity of the Irish property market performance over the last 10 years, noting that prices and rents have grown at significantly different rates in different areas.

Areas of the country that had relatively high prices and rents initially, such as Dublin, experienced the fastest pace of growth subsequently.

“This suggests that different regions of the country have experienced varying economic growth rates over the past 10 years,” it said.

It also noted that the divergence in property prices and rents between certain urban and rurals had not diminished since 2015.