Gloucester Street development part of plan for more than 2,500 rooms in the capital 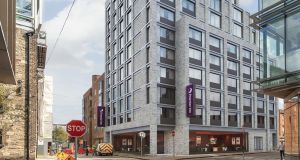 An artist’s impression of the proposed Premier Inn hotel on Gloucester Street in Dublin’s south docklands.

Located on Gloucester Street in the city’s south docklands, the site will be redeveloped into a 10-storey hotel comprising 108 bedrooms as part of Premier Inn’s ambitions to grow its existing presence as a single trading hotel at Dublin Airport to more than 2,500 rooms in the capital, and beyond.

Commenting on Whitbread’s latest acquisition, Kevin Murray, head of acquisitions for Premier Inn in Ireland, said: “We are investing strategically to secure the top locations that Premier Inn is known for. Gloucester Street, with its proximity to Trinity College and the south docklands corporate market, is exactly the type of location we are looking for. Securing the site is another important milestone for us and we’re actively seeking new freehold and leasehold opportunities across the city.”

Dan O’Connor, executive vice-president of hotels and hospitality at JLL, added: “We are delighted to once more advise Whitbread on another pre-let deal, this time in the core Dublin 2 area.”

Keith Craddock, managing director of Red Rock Developments, said: “It has been a pleasure working with Whitbread and their wider team. We look forward to delivering a high specification 10-storey hotel on one of the last remaining development sites in the south docks and adding a new landmark building to the Dublin city skyline.”

Since signalling its intention to expand into the Irish market in 2018, Whitbread has secured 635 Premier Inn rooms in Dublin city centre in four hotels – at South Great George’s Street, Jervis Street, Castleforbes Business Park and now Gloucester Street. The hotels, which are a mixture of freehold and leasehold acquisitions, are planned to open from early 2021 onwards.

Moving beyond the capital, Whitbread and development partners Greenleaf Group and Warren Private, agreed a deal last month for a 183-bedroom hotel in Cork city centre. The new hotel at Morrison’s Quay is the company’s first site in Ireland outside Dublin.