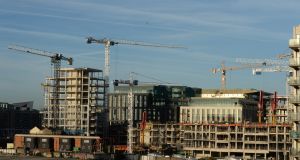 The National Competitiveness Council says it is concerned about the high cost of doing business in the Republic. Photograph: Dara Mac Dónaill

The latest research from the National Competitiveness Council, which reports to the Government, focuses on three key costs to business, credit, legal services and insurance.

The council says it is concerned that these costs are higher in the Republic compared to other countries, particularly in the euro zone, adding to the expense of doing business here.

On borrowing costs, the report, Competitiveness Challenge 2019, says that affordability of credit remains a major issue for business.

The council says that the Government needs to “further analyse” why interest rates charged to small and medium-sized businesses are rising and draw up a list of actions to tackle them.

The Republic remains an “expensive and slow jurisdiction” to enforce commercial contracts, the council says.

“In addition, attorney fees as a percentage of total enforcement cost remains high in Ireland compared to Germany, France and Spain, ” the council adds.

Its report calls on the Government to ensure that the new Office of the Legal Costs Adjudicator has enough resources to improve transparency and competition in the law.

The report urges the Government to implement the Cost of Insurance Working Group recommendations and continue to monitor their impact on the cost of liability cover to businesses.

Council chair, Dr Frances Ruane, pointed out that the Republic was vulnerable to “external shocks” as it was a small open economy.

“Consequently, we cannot afford to be complacent about our strong overall performance and must continuously strive for improvement, so that we remain a highly competitive economy,” she said.

The council is made up of senior business people and civil servants. It reports to Taoiseach Leo Varadkar and the Government through the Minister for Business, Enterprise and Innovation, Heather Humphreys.

1 Opioid executive admits to ‘no morals’ ahead of prison term
2 No new thinking in either Fine Gael or Fianna Fail election manifestos
3 Who are Ireland’s 17 billionaires?
4 Are there annual limits on inheritances or gifts to a child?
5 My father in a nursing home wants to gift me his house
6 South Dublin Credit Union members urged to borrow more to ensure survival
7 Ireland’s €200bn debt burden: how did we get here?
8 ‘If you don’t like challenges, you should not be in the airline business’
9 Ryanair wants Irish courts to block Skyscanner from selling its flights
10 Farmer seeks to challenge €3.6bn Intel plan in High Court
Real news has value SUBSCRIBE