Company raises AUS$110.2 m in a public listing on the Australia Securities Exchange 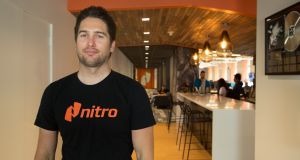 Nitro co-founder and chief executive Sam Chandler. ‘The Irish operation is absolutely critical and core to Nitro’s business today and in the future,’ he says

Nitro Software has said it plans to significantly scale operations in Dublin following its successful public listing in Australia on Wednesday.

The move comes just months after the company announced it was to double headcount locally with the creation of 70 jobs over the next two years.

Nitro, a technology company that designs software to create, edit and secure PDFs and other digital documents, said it intends to double-down on product development, engineering and R&D investment following the successful flotation.

The company now has a market capitalisation of AUS $324.9 million (€ 200 million) after raising AUS$110.2 million this week through an initial public offering on the Australia Securities Exchange (ASX).

Nitro Software’s core engineering and product development team is located in Dublin, with the company planning to scale this considerably over the coming years.

It would not be drawn on exactly how many, if any, new roles may be created in the coming years outside of that previously indicated.

Nitro employs 44 people in its product and engineering team here, a figure that is expected to have risen to more than 100 by the end of 2021.

It established operations in the Republic in 2013 with just three employees. It employs 70 people across all of its activities in Ireland at the moment.

“The Irish operation is absolutely critical and core to Nitro’s business today and in the future. What started out as a Europe, Middle East and Africa (EMEA) headquarters primarily to grow sales and better serve our customers in that market with a local presence, has grown into something much more significant for the company as a whole,” said Sam Chandler, co-founder and chief executive.

Dublin is now the company’s largest office globally, having eclipsed the San Francisco headquarters earlier this year in terms of overall team size.

Founded in Melbourne, Australia, in 2005 by Mr Chandler, Karl De Abrew, and Richard Wenzel, Nitro is now headquartered in San Francisco. “EMEA continues to represent a significant part of our overall business in terms of revenue, with almost 40 per cent of our sales year-to-date originating in the region and we expect that to continue to grow as we drive investment there,” said chief operating officer Gina O’Reilly.

“Over the past few years, the business has shifted more upstream increasingly selling to large enterprises and we’ve won some significant accounts in EMEA, including AIB, ICON, Bank of Ireland, Network Rail, Lloyd’s, Lufthansa, and Continental, to name a few,” she added.

Nitro has more than 1.8 million licensed users worldwide and serves more than 10,400 business customers across 144 countries.