New mobile app will be rolled out on phased basis in 2020, bank says 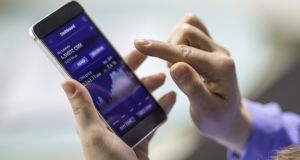 Bank of Ireland’s new app has increased functionality by 50 per cent, has enhanced security controls and will allow customers to avail of a broader set of payment options.

Bank of Ireland’s new mobile banking phone app will go live for a “small” group of staff by the end of the year, but a broader rollout of this key project in its €1.15 billion IT overhaul has been delayed until next year.

“Given the large number of customers migrating, the new mobile app will be rolled out on a phased basis over a number of months,” said a spokesman for the bank. “We will be in touch with customers closer to the time to give them detailed information on how to move on to the new app.”

Chief executive Francesca McDonagh told investors in June last year, as she unveiled a three-year strategic plan, that the bank would launch the app in the first half of this year. She said in July that it would be a big focus for the remainder of 2019.

“We have the technical functionality now, and we are going to be rolling that out to customers during the second half of this year, although the rollout will continue into the new year,” she said. “I don’t want to rush rollout. We want to make sure we’re doing it in a very sensible and appropriate way for our customers.”

The new app has increased functionality by 50 per cent, has enhanced security controls and will, for the first time, allow customers to avail of a broader set of payment options, such as direct debit and standing order services, according to the bank. It previously said that the likes of Apple Pay and Google Pay would not be available at the time of launch, but added during 2020.

Having put off IT investment during financial crisis to conserve capital as the remainder of the domestic banks fell under State control, Bank of Ireland hired Swiss software company Temenos in late 2016 to provide a new core banking system in a revamp that was estimated at the time at €500 million.

The cost had risen to €900 million by the time Ms McDonagh took charge in October 2017. She committed an additional €250 million in June 2018 to the project to include parts of the business, such as mortgages and wealth management, there were not originally in scope. A further €250 million was set aside for general restructuring, bringing the total bill to €1.4 billion.

IT overhauls are notorious for delays and going over budget, and there has been speculation internally that the final cost for the project – which has been beset by leadership changes – may ultimately hit €2 billion. The spokesman said the bank remained committed to the €1.4 billion projected cost.

UK bank TSB suffered an IT meltdown that locked almost two million customers out of their accounts in April last year as it migrated to a new system, which was subsequently found by an independent report to have been “neither stable nor complete”.

Still, Bank of Ireland has hit some important milestones. In July, it successfully moved 2.1 million customers to a new platform for debt card and ATM transactions, the largest customer migration in the bank’s history.

Central Bank deputy governor Ed Sibley told the Oireachtas finance committee that banks’ IT systems are “probably the area that I worry about the most” because of how quickly problems can emerge and escalate. He said that Irish banks “have had to catch up” in recent years with international peers following a “period of underinvestment”.

Two weeks ago, Bank of Ireland had a systems problem that resulted in delays to overnight payments.

1 FinCEN Files: Dublin business features in leak of US treasury documents
2 Chris Johns: We’re in for a triple whammy of Covid, Brexit and the US elections
3 Aldi empire wracked by family feud
4 A look at Elon Musk’s track record ahead of Tesla’s ‘battery day’
5 The FinCEN files: Unchecked by global banks, dirty cash destroys dreams and lives
6 Facebook may pull social media platforms from Europe
7 Over 2,000 offshore firms set up from home in Ranelagh, Dublin
8 How to . . . move (almost) everything to your new phone
9 Norway extends loan guarantees for Norwegian Air
10 EY Entrepreneur of the Year awards: meet four industry finalists
Real news has value SUBSCRIBE