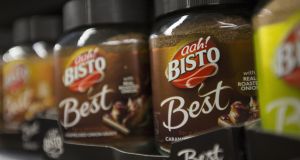 Premier Foods, the makers of Bisto gravy, reported net debt of £492.9m at the end of the first-half, compared to £509.5m last year. Photograph: Simon Dawson/Bloomberg

Premier Foods will launch a new range of Mr Kipling mini cakes ahead of Christmas after a relaunch of the popular treats brand helped it bounce back to profit.

Shares in the Bisto gravy and Oxo cube-maker surged as much as 10 per cent after the group reported a first-half pretax profit of £15 million (€17.5m) compared to a loss of £2.2 million last year.

They are the first set of results under chief executive Alex Whitehouse, who is trying to turn around the company after its share price tanked following a failed takeover attempt by US food maker McCormick & Co three years ago.

Mr Whitehouse has been credited with turning around Premier Food’s UK business, including a relaunch of the Mr Kipling cake brand, which has outperformed the rest of the group.

“Following this encouraging start to the year, with its marketing investment and exciting innovation programmes, the group has increased confidence of building on this momentum to deliver progress in the full year and beyond,” the company said.

Premier Foods sales have been boosted by a TV advertising push. The company also said sales of Nissin Soba Noodles & Cup Noodles, which it sells in a partnership with its biggest shareholder Nissin Foods Holdings, more than doubled.

The group, which also reported lower debt, now plans to capitalise on Mr Kipling’s successful reboot with mini versions of its sweet treats.

“The introduction of these new mini versions of some of Mr Kipling’s most popular products follows the significant reconfiguration of an existing manufacturing line at its Stoke bakery,” the company said. “This has vastly improved the flexibility of different cake sizes and types, and facilitates the development of more new products which closely match consumer trends.”

The Ambrosia rice pudding-maker, which has been chopping away at its debt, reported net debt of £492.9 million at the end of the first-half, compared to £509.5 million last year.

Mr Whitehouse also said the company was getting “quite rehearsed” at stockpiling ahead of Brexit, and that it continued to take the precautions it took since the “first Brexit” deadline of March 29th. – Reuters