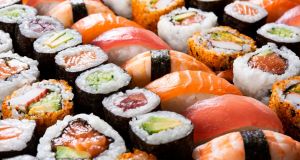 Raw fish from either salt water or fresh water can be a source of human infection due to the presence of parasites. Photograph: iStock

Some 90 per cent of 11 sushi producers audited by the Food Safety Authority of Ireland (FSAI) fell short of the standards needed to make sure consumers do not fall ill.

Some of the issues the FSAI came across included freezers not being at the required temperature for fish parasite control and the improper controls for keeping rice so as to avoid food-borne bacteria.

Sushi, a Japanese dish, is often made with raw fish and is served cold.

The FSAI said that all of the premises in its audit have since rectified the issues while the body has provided specific advice to the wider sector to improve standards.

Dr Byrne said raw fish from either salt water or fresh water can be a source of human infection due to the presence of parasites. And as there is no cooking process in sushi to kill off harmful parasites, controls need to exist to ensure the raw fish is free from those parasites.

“There has been rapid growth in demand for sushi, which can be perceived as a healthy food option by consumers,” Dr Byrne said.

“Our audit sought to establish if food safety controls were being followed and the findings are very concerning.

“It showed that over three quarters of the food businesses did not have adequate food safety controls in place for this. We also found poor traceability records, which are critical in the event of a food recall, if required.”

The FSAI study points to dramatic growth in sushi popularity in recent years, with an 80 per cent increase in the number of restaurants offering the food on their menus since the beginning of 2018. Additionally, one food delivery platform said it had seen a 60 per cent increase in sushi orders since it launched in 2015.

The FSAI surveyed three major manufacturers who produce sushi for the corporate sector and eight restaurants, from small establishments serving the Japanese food on their premises to those that deliver it to people’s homes. It found that 75 per cent of the food businesses didn’t meet the requirements for freezing fish and more than 90 per cent didn’t have the correct controls for sushi rice production.