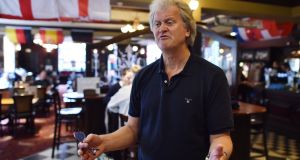 JD Wetherspoon chairman Tim Martin, who is one of the most outspoken proponents of Brexit in the UK.

JD Wetherspoon chairman Tim Martin has attacked Tory rebels as well as House of Commons speaker John Bercow for “frustrating” the Brexit referendum in parliament, and dismissed claims that a no-deal exit will be disadvantageous to the poor.

Mr Martin, who is one of the most outspoken proponents of Brexit in the UK, was speaking as the pub chain published its annual results for the year ended July 28th.

“The UK is clearly in political deadlock, parliament having refused to carry out the pre-referendum promise in the leaflet sent to every household which said: “the government will implement what you decide’,” he said.

“Democratic power in the UK in the last 30 years has been diluted by a political faction in parliament, the media and boardrooms, which has a quasi-religious belief in the undemocratic EU.”

Mr Martin went on to criticise the EU’s “unelected presidents, MEPs who cannot instigate legislation and unaccountable court”. He said voters “resent this loss of power, and distrust of politicians and the elite is the result”.

“In recent weeks, the 21 Tory rebels who helped to block no-deal were joined by 25 bishops, the latter group asserting, contrary, many of us believe, to common sense, that no-deal will be disadvantageous to the poor,” he said.

“The economic judgement of this faction, led in the past by the likes of Michael Heseltine, Peter Mandelson and Tony Blair, the CBI and the Financial Times, has been extremely poor.

“It advocated joining the disastrous predecessor of the euro, the exchange rate mechanism, the euro itself, and incorrectly forecast an immediate recession in the event of a Leave vote in the referendum.”

Mr Martin went on to claim that leaving the EU without a deal would mean the UK “avoids a legal liability” to pay the £39 billion divorce bill, and allow the UK to resume control of fishing waters, as well as “eliminate protectionist import taxes”.

“It is an absurdity to argue that a reduction in UK input costs, combined with increased democracy, will have a harmful effect on the economy – just as it would be absurd for a business to adopt this argument if its own costs were reduced,” he said.

“Elite Remainers are ignoring the big picture regarding lower input costs and more democracy, and are mistakenly concentrating on assumed short-term problems, such as potential delays at Channel ports, which are easier to extrapolate on their computer models.”

In its results, JD Wetherspoon reported a higher annual pre-tax profit as more people visited its pubs even though overall consumer confidence and spending came under pressure due to Brexit uncertainties.

The company, which operates more than 900 pubs in Britain and Ireland, said pre-tax profit after exceptional items rose to £95.4 million from £89 million a year earlier.

Pre-tax profit before exceptional items, however, fell 4.5 per cent to £102.5 million. Total sales rose 7.4 per cent to £1.82 billion, while like-for-like sales rose by 6.8 per cent, with a jump in bar and food sales. (Additional reporting: Reuters)