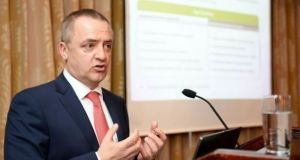 Origin Enterprises chief executive Tom O’Mahony. ‘We’ve had a disappointing performance in Ukraine, but that was more than offset by the performances in Poland, Romania, Belgium, Ireland and UK.’Photograph: Eric Luke

Agri-services group Origin Enterprises said revenue and profit rose in the year ended July 31st 2019 off the back of both organic growth and acquisitions.

But Brexit continued to overshadow things, as ongoing uncertainty made planning for potential outcomes a challenge, although the company has already put some measures in place to ensure it can continue to do business once the UK has left the European Union.

Origin, which provides specialist agronomy advice, crop inputs and digital agricultural solutions, said revenue was €1.8 billion for the year, a rise of 10.5 per cent overall and 7.2 per cent on a an underlying basis. Operating profit for the year was €82.3 million, an overall increase of 15.6 per cent and a 3.5 per cent rise on an underlying basis. Adjusted diluted earnings per share were 7.9 per cent higher at 52.65 cent. Origin said it was proposing an increase in total dividend of 1.4 per cent, bringing it to 21.32 cent.

Origin has diversified its business, exploring new markets through acquisitions, including its entry into the Brazilian agri services market.

The business also saw an exceptional charge of €7 million in 2019, mainly down to a non-cash impairment relating to its Ukrainian business.

“We’re obviously disappointed in the performance in Ukraine, we’ve seen a lot of deflation in the market there,” Origin’s chief executive Tom O’Mahony. “From Origins’ perspective, it is relevant geography for our business model. We are confident we can return the business to acceptable level of returns.”

However, the weakness in Ukraine was offset by growth elsewhere in Europe, Mr O’Mahony said.

“On the organic side, we’ve seen Ireland and the UK perform very well. It would have been ahead of of what we would normally expect,” he said. “There were some indirect factors supporting that. We’ve had a disappointing performance in Ukraine, but that was more than offset by the performances in Poland, Romania, Belgium, Ireland and UK.”

The company said it expects demand for agronomy services and crop inputs for Ireland and the UK to normalise in the coming year to a level lower than the market demand levels experienced in 2019, particularly in the fertiliser and feed market which had been lifted by the fodder crisis in the first half of its fiscal year.

“It’s actually very important that the cost base for for farmers returns to more standard levels,” Mr O’Mahony said.

“We are targeting over the five years from fiscal 2019 to 2023 that we will grow our operating profits organically between 3 to 4 per cent, and we are on track to do that.”

However, Mr O’Mahony indicated some caution in its dealings as Brexit continued to dominate the headlines, saying the company would prioritise “a prudent approach to risk management and capital allocation”. The UK remains one of the company’s bigger markets, he said.

“The outcomes aren’t known. We plan for what we can in the short term in terms of ensuring that our supply chains are prepared to be able to deliver our service and our products to our customers in the event the UK doesn’t negotiate a transition arrangement,” Mr O’Mahony said. “The long-term direction of travel on Brexit really hasn’t changed, when you take away all of the noise. The outcomes of of Brexit will ultimately be down to what is the final shape of UK agricultural policy, as it as it takes ownership of that again, and what will be the future EU-UK trade relationship, what will be the direction of travel on sterling euro?

He predicted a structural transition in the level of supports under the Common Agricultural Policy, and noted there were opportunities for Origin as farming models became more business oriented and technically focused to deliver greater productivity gains.

“We’re not making light of the challenges as this transition takes takes place. But there’s a lot of unknowns at the at the moment,” he said.

The company previously said it had spent between €10 million and €15 million in Brexit-related contingency planning.