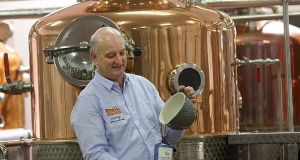 Pat Rigney filling the first-ever bottle of Drumshanbo Gunpowder Irish Gin, in 2015. ‘We are working our way around Brexit, which is a challenge for everybody in our sector and has caused a lot of uncertainty,’ he says

The owner of Drumshanbo Gunpowder Irish Gin has decided to press ahead with plans to expand its capacity and build a visitor centre at its distillery in Leitrim in spite of uncertainty created by the potential for a no-deal Brexit at the end of October.

Pat Rigney, founder of the Shed Distillery in Leitrim, said this will result in the addition of 25 new jobs and an investment of about €2 million.

“We are working our way around Brexit, which is a challenge for everybody in our sector and has caused a lot of uncertainty,” he said, adding that the company was shipping extra supply to a number of continental European markets as a contingency measure against a hard Brexit.

“But we continue to double down on the visitor experience and we’re well advanced with that. It’s a big commitment by us to Drumshanbo and we’re also increasing our capacity.

“The challenge [of Brexit] for us is to be more resourceful and to work even harder, open new markets and all that.”

Britain accounts for between 15 and 20 per cent of Drumshanbo’s gin sales, according to Mr Rigney, while most of its product for continental Europe goes across the UK landbridge.

“We’d also be concerned about the domestic market as UK tourists aren’t coming here in the same numbers,” he added.

The distillery has just secured its 50th overseas market by signing a deal in Finland with State-owned Alko, which will see Drumshanbo gin being made available in a wide range of shops there. “This is the only way to see your brand in Finland,” Mr Rigney said.

This is a significant breakthrough for the company given that Finland’s off-licence market is controlled by the state. Sweden and Norway operate similar regimes and Mr Rigney hopes to now crack those markets.

The Leitrim distillery is hoping to increase its revenues to between €7 million and €8 million, up from €6 million previously.

“We are on track. It’s step by step growth but we need to sleep with one eye open ... and we need to be aware that there’s a lot of uncertainty out there. We never expected it to be all plain sailing.”

1 Only way is up for Stripe as valuation skyrockets
2 Basic income for all: Has the Covid crisis given us a new economic model?
3 Chris Johns: Economies may enjoy ‘roaring twenties’ if ministers learn lessons
4 There was no vaccine for Anglo: Why the last crisis was different
5 Wet pub openings fuelled rise in Irish Covid infection rates – report
6 Irish designer of Oxford vaccine: ‘I’ve never worked so hard in my life’
7 Ten of the most mysterious aircraft disappearances
8 Why we should ban autonomous cars now
9 Fitbit Charge 4: Added GPS makes a world of difference
10 Deutsche Bank’s head of accounting under investigation over Wirecard
Real news has value SUBSCRIBE