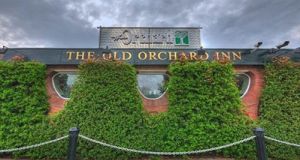 The Old Orchard pub in Rathfarnham, which publican Charlie Chawke purchased for €22 million 14 years ago

The country’s most expensive pub, the Old Orchard in Dublin, enjoyed earnings last year of over €1.1 million.

Publican Charlie Chawke purchased the pub in Rathfarnham for €22 million 14 years ago, a record which has yet to be broken.

The earnings represent a marginal increase on the earnings of €1.096 million enjoyed in 2017.

In an interview, Mr Chawke said that his nine-strong pub group – seven in Dublin and two in Adare, Co Limerick – recorded revenues of €30 million last year. “Business is very steady,” he said.

The Orchard is operated by Mr Chawke’s daughter Ali, and he said that the business has recently added a wine and tapas bar. “This was Ali’s idea and it has been very successful since it opened a couple of months ago. It replaced the off-licence. That wasn’t making any money as it couldn’t compete with the supermarkets,” he said.

The operation of the Chawke pub group is very much a family affair, with Mr Chawke’s adult children each operating a pub. Jenny operates the Goat Grill, Liza runs the Dropping Well, Bill operates Searson’s and David operates Bank on College Green.

The amount the company owed to credit institutions last year reduced from €19.22 million to €18.57 million.