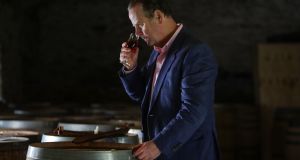 A descendent of Daniel O’Connell is hoping to take advantage of the high demand for Irish whiskey by bringing out his own spirit in tribute to the famous politician.

Maurice O’Connell and his wife Francesca are behind Wayward Irish Spirits, a Co Kerry-based company that has recently established The Liberator brand.

The company is in the process of establishing a “grain to glass” distillery and small visitor centre at the Lakeview Estate outside Killarney. The 100-acre estate was built in 1869 by Maurice’s great, great, great, grandfather, James O’Connell, a younger brother of Daniel O’Connell.

The politician became known as the Liberator due to his success in the campaign to achieve Catholic emancipation in the 19th century.

The O’Connell family has invested about €1 million in the business and last month began a push to raise an additional €1 million in funding through the State’s employment and investment incentive scheme (EIIS), which allows small investors to claim tax relief on investments in emerging companies.

The money is to be used to lay down additional whiskey stocks for finishing in future years.

Wayward last year began growing its own barley on the estate for its whiskeys and expects to start-distilling on-site by 2024 with plans to employ about 15 people by this time. In the interim it has sourced mature malt and grain whiskeys to finish and blend at the estate from sources that include John Teelings’ Great Northern Distillery in Dundalk, and Bushmills in Co Antrim.

The family’s first product to hit the market is a malt whiskey finished in Tawny port barrels. It is to be released early next year as The Liberator Irish Whiskey.

“We haven’t finalised the branding yet or the bottle so we can’t launch until February although we showcased it at Whiskey Live recently and it was well received,” Mr O’Connell said.

He said the O’Connell family began importing spirits to Co Kerry from as early as 1450, although not always legally.

“We wanted to do something that was connected to the estate and to our family history. My background is in property in London so when it comes to whiskey I am an enthusiastic amateur,” he said.

The family is also looking at launching its own gin range at some point. Mr O’Connell admitted that it is costing the family about three times as much to grow its own grain and mill it than buying it elsewhere but said it would give the whiskeys more authenticity.

He said the family hoped his famous ancestor would be proud of the new business. “Daniel famously took the pledge later in life but I like to think he’d have raised a glass to our success.”

1 We are ‘sale agreed’, but can we go back with a lower offer?
2 Working from home: New costs, new stresses and little relief
3 Eason to lay off 150 staff as it prepares for June reopening
4 Joint accounts: if one of us dies, can the other access the money?
5 ESB shelves plan for €500m electricity generator at Poolbeg
6 HSBC board rethinks overhaul and seeks even deeper cuts
7 Ryanair almost certain to oppose German government’s bailout of Lufthansa
8 Restaurants and gastropubs hope to avoid a dry reopening
9 ‘Over 1,000’ pubs have interest in Covid-19 insurance test case
10 FBD says 700 claims received over Covid-19 interruption
Real news has value SUBSCRIBE