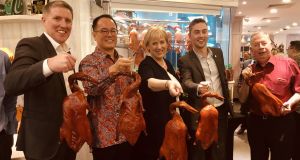 Duck producer Silver Hill Farm is finalising a €25 million investment programme as it looks to increase the volume of ducks it processes each week.

The Co Monaghan company, which was acquired earlier this year by Northern Ireland agri-food business Fane Valley Group, is in the midst of an aggressive expansion drive into southeast Asia and next month its board is expected to make a final decision on its investment plans.

Barry Cullen, the company’s head of sales and marketing, told The Irish Times that the significant increase in capacity comes as Silver Hill awaits approval from Malaysian authorities to enter that market.

An audit from the Malaysian authorities, where about 20 million ducks are consumed per year, will take place next week. If granted entry, Silver Hill would be the first Irish protein company to sell anything in Malaysia and the first external duck company in the world to get into that market.

Silver Hill currently produces 85,000 ducks per week and targets the top end of the market with a more expensive product than some of its competitors. Mr Cullen said the company is “the wagyu of duck”, referring to a high-end Japanese breed of cattle.

Its export business has rapidly been increasing in recent years and the company won the export growth category at Bord Bia’s Food and Drink Awards last week.

Silver Hill’s ducks are in 99 per cent of restaurants in London’s Chinatown, Mr Cullen said and they also now ship a container load of 4,000 ducks per month to Singapore.

“We only ever target the top 10 per cent in any market based on price. We don’t sell into food courts,” he said, adding that it would this year post revenues of €2.5 million from its Singapore operation.

Silver Hill’s strategy is to move into Vietnam, Cambodia and Indonesia in the coming three to five years. Beyond that, it’s looking to enter China, the Philippines, Brunei, Myanmar, Laos and Taiwan – subject to trade deals on poultry being agreed.

“If you got into one of the cities in China you’d fill the factory,” Mr Cullen said, noting that the company could expand to produce 240,000 ducks a week if they chose to run two shifts at their Co Monaghan facility.

To help meet demand, Silver Hill also plans to increase the number of outside duck breeders it uses from 24 to 27 by the end of the first quarter of 2020.

Silver Hill was founded in 1962 by Ronnie and Lyla Steele in Emyvale, Co Monaghan, with just six ducks. The company controls all aspects of duck production from breeding, egg production, hatching and selection, to processing, cooking and packaging.

Daimler boss warns workers of need for painful cutbacks 15:48
Government deficit balloons to €5.3bn on back of Covid spending 15:37
OneProjects confirms €11m investment led by LSP and Atlantic Bridge 15:32
Judge urges Claddagh Jewellers family to try to resolve their differences 15:25
US jobless rate dropped to 11% in June before virus spike 15:08

1 Why are markets booming when a crash is on the way?
2 How much do Irish people earn? And what will Covid-19 do to our wages?
3 Drumcondra credit union collapses as merger plan fails
4 Government deficit balloons to €5.3bn on back of Covid spending
5 Could your old car be giving away all your secrets to its new owner?
6 Permission sought for €150m film and media campus in Wicklow
7 Galway Clinic gets orders dismissing action over board decision
8 Dunnes Stores trials online ordering from Cornelscourt outlet
9 Judge urges Claddagh Jewellers family to try to resolve their differences
10 Innovation hubs keen to get show back on the road
Real news has value SUBSCRIBE