Well-known businessman wins at EY Entrepreneur of the Year awards 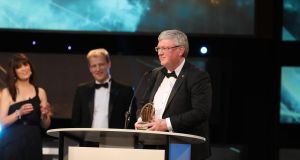 Pat McDonagh, the managing director of Supermac’s and owner of the Só Hotel Group and Plaza Group has been named EY Industry Entrepreneur of the Year.

Mr McDonagh, who opened his first Supermac’s restaurant in Ballinasloe in 1978, has built a company with his wife Una McDonagh which has 116 outlets and employs more than 4,000 staff. Aside from the fast-food chain he controls, Mr McDonagh has begun to build a hotel group which now has six hotels and a chain of motorway service stations which comprises of six outlets including the Barack Obama Plaza.

The former school teacher, who has helped to establish up to 60 self-employed franchisees in their own successful businesses, hasn’t always had it easy. Recently he had to fight a trademark battle with international rival McDonald’s. Supermac’s won the case in January, requiring its rival to relinquish its “Big Mac” trademark in Europe.

“Pat is a true entrepreneur and his achievements are outstanding,” said Jeremy Fitch of Invest Northern Ireland, one of this year’s judges.

“Through Pat’s different businesses over 4,000 people across Ireland are benefiting from employment opportunities. Pat has a great story to tell of his business journey and hopefully he can be an inspiration to many other potential entrepreneurs.”

Mr McDonagh said he was “delighted” to have won the industry award.

“I’ve been overwhelmed by the success of the awards in the sense that even when the awards are finished tonight you’ve met a lot of people who you can always call up and always link in with for help and I see that happening. The alumni is a great network and that’s in itself well worth entering the awards for,” he added.

The other finalists in the industry category this year were: Donnacha Hurley of Motor Mania; Ashley McCulla of McCulla (Ireland); Laurence O’Kane of IMED Healthcare; Matt Ryan of Press Up Entertainment Group; Una and Peter Kearns of the Institute of Education; Patrick Derry of Derry Refrigerated Transport; and Mark Whitaker of Johnson and Perrott Motor Group.

1 Why are markets booming when a crash is on the way?
2 Lifewave’s miraculous patches don’t keep the dreaded taxman away
3 CRH to proceed with $3.5bn acquisition of US cement maker Ash Grove
4 Albion profits fall
5 Stocktake: Day trading like it’s 1999 will end in tears
6 Panama Papers: The secret offshore world of the elite
7 High time: Netherlands moves to clean up absurd cannabis policy
8 You now get almost nothing for your money . . . but it could be worse
9 Househunters squeezed as banks tighten rules in Covid-19 crisis
10 Trump opens the Gates to universal flu vaccine
Real news has value SUBSCRIBE