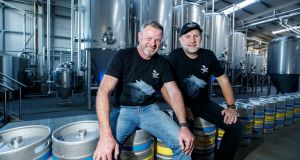 Wicklow Wolf was established in 2014 and recently moved into a new 17,000sq ft production and packaging facility in Newtownmountkennedy, Co Wicklow. It has undergone a brand refresh thanks to support from Bord Bia.

The craft brewer sources its hops from a commercial hop farm in Roundwood, Co Wicklow – the first of its kind in Ireland for more than 20 years – overseen by company co-founder Simon Lynch.

We made a decision, probably two years ago, not to focus on the UK in terms of export. We are really at the beginning of our adventure in export so we are lucky that we have no significant volume riding on the UK. I know other craft breweries who do have significant interests in the UK and if I was them I would be worried.

Are you examining new markets?

We have focused on France, Italy, Spain and the Netherlands in terms of export. We would have assumed that the UK was going to be a major market for us but we have had to place our focus elsewhere and have doubled up our attention on the Irish market, which is obviously very important to us.

On the upside, it’s made us work harder and work further away. On the downside, the UK could have been a really large market for us and I feel now we don’t have proper access to that. We had been approached by distributors in the UK but the timing wasn’t right for us at the time. In hindsight, it was probably a good thing and I’m grateful we are not already embedded in the UK.

How much do you rely on raw materials from Britain or from north of the border?

Hops are a big part of our business and we have secured contracts from the US that are cheaper than what we were getting from the UK. I probably would not have explored the US market without Brexit on the horizon. Logistically, I assumed that, because the UK is on our doorstep, it would be easier and cheaper to get raw ingredients from there.

We have a hop farm in Roundwood but it doesn’t give us much security against Brexit because only certain types of hops will grow in Ireland.

All our base malt comes from the Malting Company of Ireland in Cork. Irish producers don’t produce a wide range of speciality malts so we are bringing those in from Germany and Belgium through an Irish agent.

We were sourcing in the UK up to 18 months ago under the assumption that the whole thing would be sorted in a way that made sense for everyone.We were wrong.

What about your packaging?

We have just moved into a brand new facility in Newtownmountkennedy and we can now cater for whatever customers want as everything is brewed and packaged in-house. We have a contract on our cans which sets the price so we know what we are paying going forward. Glass is more volatile, so we are actively looking at that all the time. We are reducing our plastic for sustainable reasons and our Irish cardboard box manufacturer has not indicated that there will be any issues with supply.

It has forced us to find opportunities. It takes some of the laziness out of the business to some degree as it forces you to look for business in places you might not have considered beforehand. Those opportunities were there anyway. I don’t really think there is a good angle to Brexit but it has forced us to look at other angles.

The biggest threat is a threat to the wider economy. All we can do it brew the best beer we can and present it in the best way – we are not cheap and we are not going down the route of heavy discounting of beer.

Because we have now leap-frogged the UK, perhaps it will mean that we are in the growing European market before many of our competitors. The people that are in there earlier will be able to take better advantage of the growth.

Are you stockpiling goods or raw materials?

We have spent a lot of money stockpiling as much as we can afford to do and as much as we have space to do. Obviously, this has a negative impact on cash flow but we have done as much as we can on that front. We have three to four months’ advance stock of hops in storage at the moment.

How do you think the British and Irish governments have handled the negotiations?

I think that the Irish Government have been dignified and courteous but firm. The British government is shambolic and I think they cannot get their heads around the fact that they are not going to leave on their terms.

Looking out five years from now, how do you think your business or industry will have changed as a result of Brexit?

1 ‘Saudi Arabia is where the opportunities will happen in future’
2 Data centres will force State to choose between climate and investment
3 MSD buys Takeda biologics plant in Dunboyne
4 Trump’s TikTok move may have far-reaching consequences
5 Project to identify spare intensive care beds accelerated by pandemic
6 State’s biggest landlord records 30% rise in rental income
7 What will the office market look like after the great remote working experiment?
8 Scars from the crash give Irish banks 2.6 billion reasons for Covid caution
9 Nine Goodman companies made largely untaxed profit of €170m
10 Wirecard was looted before collapse, German prosecutors suspect
Real news has value SUBSCRIBE