IFA says farmers are ‘sick of being short changed’ 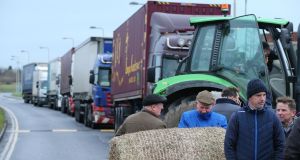 Farmers who mounted a blockade of a major distribution centre for Aldi supermarkets in a protest at falling beef prices say it is the first of many such protests.

The farmers who are members of the Irish Farmers’ Association drove a tractor and trailer across the entrance to the facility in Naas, Co Kildare at 7am on Thursday.

The distribution centre is one of only two in the Republic and serves Aldi outlets in half of the country including Dublin. However the German retailer said its shops remained open.

In a statement, the association said it was demanding “a significant and immediate beef price increase”

IFA President Joe Healy said that farmers were “sick of being short changed” by meat factories and retailers on beef price.

“The supply chain is delivering mega profits for factories and retailers at the expense of farmers. We can have all the reviews we like, but farmers need a price increase now,” he said in a statement supplied by the IFA.

Speaking later from the protest in Naas, Mr Healy said: “This is the first of many protests.

“Some of our members see neighbouring Northern Ireland beef farmers getting close to 50c a kilo more,” he told RTÉ radio’s Morning Ireland.

Set up at @Aldi_Ireland in Naas for the next 12 hours. Retailers are part of the beef supply chain that's broken. @joehealyfarmer will be on @morningireland after 8am. pic.twitter.com/YM2d4ZOe7J

He said the Beef Taskforce meeting held earlier in the week had left farmers feeling insulted. “There was no minister there, no retailer. Meat Industry Ireland came in with nothing to offer. The best we could get from them was that they would consult with their members.”

Also on Morning Ireland a truck driver attempting to make a delivery to the distribution centre clashed with protesting farmers saying “I’m not robbing your money, I’ve a day’s work to do. Have you no cattle to mind?”

The driver said he knew the farmers were struggling, but that everyone was struggling. ‘You’re stopping us getting paid.”

Roundtable talks aimed at resolving the ongoing dispute between beef farmers and processing factories over prices began in the Department of Agriculture on Tuesday morning.

Last week farmers, not aligned to the IFA, blockaded Dublin city centre as part of the ongoing protest over the lack of progress on demanded reforms in the sector and improvements in beef prices for farmers.

The beef taskforce talks had been due to begin in October, but the initial meeting failed to go ahead following protests by farmers over the fact injunctions remained in place against two farmers who had blockaded processing factories.

The countrywide protests blocking the entrances of meat factories essentially shut down the processing industry, and led to companies running the plants to seek injunctions against individual farmers.

“To hear Meat Industry Ireland representatives after the beef taskforce talk about the ‘green shoots’ of a market recovery when the grass has been growing under their feet for weeks is an insult to farmers’ intelligence and another delaying tactic,” Mr Healy added on Thursday.

“The supply chain is failing and today we are blocking it for 12 hours. We will continue to take action until processors give a significant price increase,” he said.

In a statement, Aldi said it was “extremely disappointed” by the protest.

“We welcomed the resumption of the Beef Taskforce this week and have engaged openly with farmer representative organisations on the beef issue over recent months.

“Aldi has a policy of open communications with all of its stakeholders, including the IFA. To be very clear, Aldi received no request for engagement on this issue from any member of the IFA leadership, no communication about specific concerns about the mechanics of the beef market, including age specification, and no warning of any grievance the IFA had before this morning.”