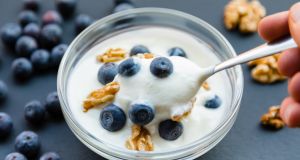 The agribusiness, which has a portfolio including potato production, said sales grew from €40.6 million to €45.2 million in the year ended August 31st. The 2018 results have been restated after Donegal off-loaded animal feed business Robert Smyth & Sons earlier this year for €17.25 million.

The Smyths business manufactures animal feeds from a facility in Ballindrait, Co Donegal, and supplies branded and own-brand feed products for the beef, dairy, sheep, pig and poultry industries across the north and northwest of Ireland.

Profit before tax for the group rose from a restated €2.02 million to €3.1 million before exceptional items.

The dairy arm “continued to deliver to management expectation with double digit growth in a competitive marketplace”, the company said. Its seed potato business, meanwhile, experienced revenue growth through increased demand despite being constrained by weather related setbacks.

“We continue to invest in the development of innovative seed potato with six new varieties commencing commercialisation in the coming year,” he added.

In respect of the company’s dairy arm, Mr Vance noted that a significant capital project is underway to double the company’s capacity in its Killygordon, Donegal, based business.

Managing director Ian Ireland said in respect of the dairy arm that the brand will see significant investment in marketing early next year to further support its growth.

“Furthermore, and in response to the broad consumer concerns re sustainability, the business will undergo a significant change to its pack format in early 2020 which will remove 200+ tonnes per year of plastic from the supply chain,” Mr Ireland said.

Following the sale of Smyths, Donegal Investment Group posted a cash position, net of debt, of €21.3 million at the end of the year.

“The group will continue its strategic review to assess all options available to maximise shareholder value, and shareholders will be updated at the appropriate time,” Mr Vance said.

1 Lockdown exit: How can Irish economy reopen without big health risks?
2 Finance ministers gather as fears grow even the future of the euro zone is at risk
3 Property market has not felt full impact of Covid-19, warns Sherry FitzGerald
4 I want to change my will quickly in case I fall ill. Do I need a lawyer?
5 Government announces €1bn in supports for businesses
6 Toast believed to have cut its Dublin staff by 50%
7 Coronavirus: Property rental in the jaws of the epidemic
8 German fund closes €93m Harold’s Cross build-to-rent deal
9 Cold water poured on idea of ‘helicopter money’
10 Tesco says coronavirus costs could reach €1bn
Real news has value SUBSCRIBE