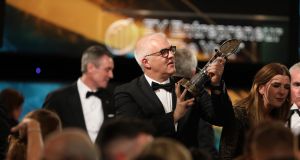 Richard Kennedy of Devenish, the 2019 EY Entrepreneur of the Year. Photograph: Maxwells

Richard Kennedy, the chief executive of agri-tech business Devenish, has won this year’s overall EY Entrepreneur of the Year award.

The global company, specialising in animal nutrition, operates in more than 40 countries and in the past 20 years has experienced huge growth, increasing its turnover from £5 million and 23 employees in 1997 to more than £250 million turnover and more than 500 employees in 2018.

Under Mr Kennedy’s direction the Belfast-based company recently received €118 million in funding from the European Investment Bank to help it grow turnover to £350 million within the next three years.

Mr Kennedy received the prestigious award at a gala event in Dublin on Thursday evening, attended by 1,500 business leaders. In addition to being selected as the overall winner, Mr Kennedy also won the award for EY International Entrepreneur of the Year at the awards, which is now in its 22nd year.

Anne Heraty, chairwoman of this year’s judging panel, said that Mr Kennedy has been instrumental in leading the innovation that has been so critical to Devenish’s success.

“He has developed a clear and ambitious vision for the business to support their growth in global markets,” she added.

Mr Kennedy will now go on to represent Ireland at the World Entrepreneur of the Year Awards in Monte Carlo next year, where he will compete with more than 60 leading entrepreneurs from around the world.

“He is a great example of how boldly pushing the boundaries within an industry can lead to great success,” Mr McLoughlin said.

Mr Kennedy said he was “absolutely floored” to win the awards.

“For me, the recognition of this is recognition for my colleagues and our team in Devenish. They’re incredible people.

The other competitors in the international category were: Paul McKenna of Mac-Group; Philip Noone of Aalto Bio; Lulu O’Sullivan of Giftsdirect. com; Lily Holmes of PB Machine Tech; Shane Evans of Scrapinghub; Brian Leslie of Seaquest Systems; and Andrew Day of Keywords Studios.

Each year, EY presents a special award to individuals who have made a significant contribution to life on the island of Ireland. This year, the honour was awarded to former Ireland rugby coach Joe Schmidt who “led his players to success on the field, which has driven higher standards in the game at all levels”.