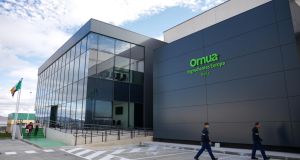 Ornua’s new facility in Ávila, Spain, developed at a cost of €30 million

The facility, on a former Ornua cheese-manufacturing site that was destroyed by fire two years ago, produces mozzarella and “pizza cheese”.

Ornua, which supplies enough cheese for more than 100 million pizzas each year, said the opening of the facility tied in with the creation of a new division, Ornua Ingredients Europe, which will bring its Spanish and British ingredients businesses together. The new division will have a combined turnover of more than €300 million, more than 600 staff and four facilities.

The site, which employs about 120 staff, includes a research and development centre that is specifically looking at the developing the “next generation of pizza cheese and cheese ingredients” for a market valued at more than $130 billion.

“It’s close to our customer base and gives us a foothold in continental Europe,” said Ornua chief executive John Jordan, adding that expanding the company’s “geographic footprint and product footprint is important”.

The Spanish plant also features a cooling system and technology to produce food for the “stuffed crust” sector of the pizza market.

“This major investment will play a key role in enhancing our cheese ingredients capacity and capabilities,” Mr Jordan said.

Dublin-headquartered Ornua has annual sales of more than €2 billion and is the Republic’s largest exporter of dairy products. Its Ornua foods division is responsible for the sales of consumer brands including Kerrygold, Pilgrims Choice, Forto and Beo milk powders. The ingredients business sells to food manufacturing and food service customers.

The company has faced some difficulties of late in the US, where Kerrygold is the number two butter brand. Given US tariffs, the company expects to have to increase the price of a 227g pack of burger to $3.99 from $3.50.

“Unless that can be recovered from the market, it has the potential to have a detrimental impact on profitability and on the price we achieve for our farmers,” Mr Jordan said.

“In essence we have to put through price increases and we have to wait and see what the consumer response will be.”