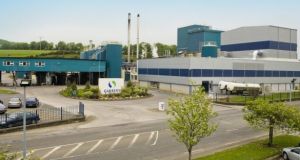 Cork-headquartered food and ingredients group Carbery has secured a €35 million loan from the European Investment Bank (EIB) towards the cost of a €78 million manufacturing plant in Ballineen.

The new facility, which forms part of a €100 million investment programme by the company behind Dubliner cheese, will enable the company to diversify its range of products and produce mozzarella for export.

Carbery, which employs 700 people, now operates from eight locations across Ireland, Britain, the US, Brazil and Thailand. Its plant in Ballineen is the Republic’s largest single cheese-producing facility, producing almost 25 per cent of the State’s annual output.

The company is owned by four Irish co-operatives – Bandon, Barryroe, Drinagh and Lisavaird.

He said it would secure new markets for Irish dairy farmers.

The 12-year loan is the first Irish investment provided under a €400 million streamlined agriculture and bioeconomy financing programme launched by EIB last year.

The EIB is the world’s largest international public bank, and last year provided €970 for infrastructure and private sector investment across Ireland. This included €40 million for EY Entrepreneur of the Year winner Devenish Nutrition as part of a bigger €118 million long-term funding deal.

Carbery Group, which last year celebrated 50 years of production, reported improved earnings before interest, tax, depreciation and amortisation to €43.9 million last year on the back of a 1.5 per cent increase in turnover to €423 million.

1 Over 400 complaints from migrant workers at meat plants lodged with WRC
2 Avoca warns of redundancies due to coronavirus
3 Ufurnish: ‘It’s like Skyscanner, but for furniture’
4 Companies without tax clearance shut out of Covid wage subsidy
5 Errant texts highlight weaknesses in banks’ digital shift
6 The Irish Times Deal of the Year: The three finalists
7 ‘No demand... because there are no people’ at well-known Dublin pub
8 Staff at Dublin and Cork airports to vote on work practice changes
9 Moving in and out of lockdown is a recipe for economic disaster
10 Ivana Bacik opposes Bartra’s Ballsbridge shared co-living plan
Real news has value SUBSCRIBE