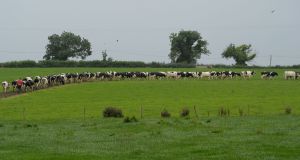 A reduction of up to 28 per cent in carbon emissions in the dairy beef sector is achievable, according to new Irish research. Photograph: Alan Betson

Farmers could significantly reduce their carbon emissions through better breeding in the dairy beef sector and slaughtering animals earlier, according to new Irish research.

A reduction of up to 28 per cent in carbon emissions in the dairy beef sector is achievable, the five-year collaboration by Teagasc, the Irish Cattle Breeding Federation (ICBF) and the ABP Food Group, Ireland’s largest meat processing company, suggests.

The findings mean it may be possible to reduce emissions from the national dairy beef herd without having to cut its size, it is also suggested.

Some 3,000 cattle have been evaluated in the research enabled by technology that monitors enteric (intestinal) emissions of individual animals.

The study is examining the environmental and economic impacts of improved genetics on the dairy beef herd. The results also highlight the potential for improved yields (due to increased weight) of up to €200 on animal carcass values for beef farmers.

Head of dairy research at Teagasc Dr Pádraig French said production of beef from the dairy herd on pasture-based systems was environmentally and economically efficient. “This research has demonstrated it can be made even more efficient by dairy farmers selecting the best bulls to produce animals which are finished at a younger age with lower feed requirements.”

There is a major shift away from beef sucklers to dairy beef cattle, which is now the most important source of Irish beef.

“As the national dairy herd is now contributing more than 60 per cent of the beef animals the impact of dairy farmers selecting suitable beef sires has the potential to have a very significant impact on national livestock carbon emissions,” Dr French said.

Most of the research was carried out at an ABP research farm, a 280-acre holding owned and managed by James and Michael Sheppard in Clonegal, Co Wexford. Some animals were also brought to the ICBF’s performance test facility at Tully, Co Kildare, where data on feed efficiency and greenhouse gas output was generated.

ABP technical and sustainability director Dean Holroyd said the data is showing it is possible to significantly reduce the carbon impact of the national dairy beef herd without having to reduce its size.

“It’s clear that a carbon-reduction opportunity exists through improved genetics and we believe that the application of these findings can have a significant role to play when it comes to agricultural greenhouse gas abatement as set out in the Government’s 2019 climate action plan,” he added.

ICBF technical director Andrew Cromie noted the results established on the farm were now critical components of its dairy beef breeding programme. “This gives us great confidence that outcomes from the study to date are real and repeatable across the dairy beef industry. In the midst of all the despair around beef, this is a really positive story.”

Metrics such as age at slaughter and enteric methane output needed to be included in routine genetic evaluation and herd benchmark systems.

Some 700,000 beef dairy calves are produced annually with most slaughtered at 30 months. Moving that forward by just two months would provide a 10 per cent cut in enteric emissions, Dr French said.

Applying the programme in full could result in a annual cut of a million tonnes of CO2 equivalent by 2030 – currently agriculture emissions are at 20.2 million tonnes.

The research will be peer reviewed prior to publication.