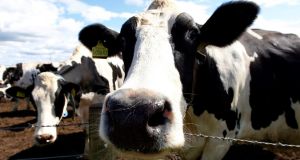 The crisis is primarily related to the price farmers are getting for their animals at the factory gate.

Minister for Agriculture Michael Creed has called on all parties in the beef crisis to “get back to the table immediately” after an application was made to have injunctions against two farmers involved in a blockade of a meat factory lifted.

The application in relation to the injunctions against Fine Gael councillor Pauric Brady and local carpenter Colm Leonard at the request C&D Foods could pave the way for the beef task force to begin its work as early as next week.

“The reconvening of the beef market taskforce and implementing the beef sector agreement is my priority,” said Mr Creed in a statement.

“A significant impediment has now been removed which is welcome. All parties must now engage with the independent chairman and get back to the table immediately.”

Farmers staged two days of protests in Dublin city centre this week, causing significant traffic disruption. Those protests were linked to those which caused major disruption to the beef industry last summer when meat factories were blockaded.

The farmers have a number of demands, but the crisis is primarily connected to the price they are getting for their animals at the factory gate. Following talks in recent months, the blockades were stood down and a taskforce to examine the issues was formed.

However, the taskforce foundered before it could begin its work when members of Meat Industry Ireland, the body representing processers, were prevented from entering the Department of Agriculture by more protesting farmers.

Another key demand has been for the lifting of injunctions against the individual farmers who were involved in the blockades.

In a statement on Thursday, C&D Foods in Edgeworthstown, Co Longford, said it had applied to have the injunctions struck out following meetings with Minister for Justice Charlie Flanagan and Minister for Agriculture Michael Creed.

“Over the past few weeks we have met with and received assurances from the Minister for Justice and Minister for Agriculture in relation to the intimidation and threats made against management,” it said.

“We understand and respect the right to picket and peacefully protest but there is no place for blockades, threats and intimidation of staff and suppliers.

“The Minister for Justice has assured us that the relevant authorities will act to protect our employees, our business and uphold the rule of law. Following these consultations and assurances we have decided to apply to strike out these injunctions.”

The company, which is a pet food facility, said it was “illegally blockaded” in September, during which time “staff were intimidated” and it was forced to lay off 187 of the 612 people employed on the site.

“ABP, since acquiring an interest in C&D in 2008, has invested significantly and quadrupled the activities in the site,” the company said. “The blockade coincided with blockades at beef processing plants.

“The blockade was led by Fine Gael Cllr Pauric Brady and Colm Leonard, a local carpenter, in conjunction with the Beef Plan Movement.

“We have an obligation to protect our employees and our business. We sought and were granted injunctions to allow our employees to return to work safely.

“We made a complaint to the gardaí following threats made against management in relation to these injunctions.”

“The beef taskforce needs to be convened as soon as a possible,” he said. “What farmers are really looking for now is a price increase.

“This is well overdue as shown in the new Beef Price Index and the fact that the price has increased substantially in other markets.”

The IFA said on Thursday afternoon the beef taskforce will meet on Tuesday morning at Agriculture House on Kildare Street.

The Beef Plan Movement, which was behind last summer’s initial wave of protests, also welcomed the lifting of the injunctions said the task force “must now sit straight away”.