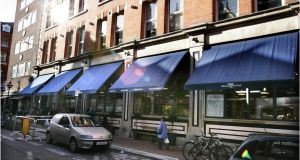 The founders of the Fallon & Byrne restaurant and retail group have exited the business, in the wake of a difficult period for the epicurean group following the sudden closure of one of its biggest Dublin outlets.

Fiona McHugh, the former editor of the Sunday Times Ireland edition, and her husband, property developer Paul Byrne, who together owned a 45 per cent stake, have agreed their departure in a deal thrashed out with other investors.

Ms McHugh and Mr Byrne founded Fallon & Byrne in 2006 when they opened its flagship foodstore and restaurant on Exchequer Street in Dublin city centre. According to a statement issued by the company on Friday, the founders will “depart from involvement” with the business, including their role as directors.

The statement said that “existing investors” who have taken full control of the group include former Superquinn finance chief, Frank Murphy, and Brian Fallon, a Kildare restaurateur and the former president of the Restaurants Association of Ireland. It did not clarify if any other investors are involved in the deal.

The statement also made no mention of the status of several other minority investors in the business. A spokesman for Fallon & Byrne said he was unable to provide any further detail on precisely who now owns the group.

The company said it will focus in the near-term on expanding its flagship Exchequer Street outlet, where it recently received planning permission for a revamp. It suggested that the investor group that has taken control of the business will provide the funds for this expansion.

The group also confirmed its store in Dún Laoghaire will continue to operate as normal. It did not, however, clarify if Fallon & Byrne still plans to go ahead with new outlets that were planned for Dundrum Town Centre or Connolly Station in the city centre.

Last year, Fallon & Byrne had been seeking investment of up to €6 million to facilitate an ambitious expansion of its footprint. It appears that may now be on the back burner.

The departure of the Ms McHugh and Mr Byrne comes after Fallon & Byrne suddenly closed its large outlet in the Swan Centre in Rathmines at the beginning of the month. Prior to the closure, the group had annual sales approaching €15 million.

“The new structure and investment allows us to restore certainty about the future of this respected business and brand. We have a lot of exciting opportunities which, with the right planning and investment, will allow us to grow the business over the coming years,” said Mr Murphy.

“With planning permission secured and the investment in place, we are ready to embark on the next chapter in the development of this business.”