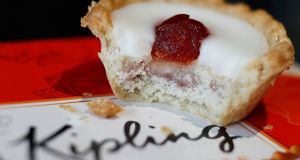 Mr Kipling maker Premier Foods has reported sales growth of 2.6 per cent in its third quarter compared to the prior year.

The Dublin-listed food group, which also produces Ambrosia custard and Bisto gravy, said growth for the 13 weeks ended December 28th, 2019, could largely be attributed to “sweet treats sales” which increased 8 per cent.

Grocery sales grew by 0.3 per cent in the quarter, as a better UK performance was partly offset by weaker international sales. The UK, which represents 94 per cent of the group’s annual sales, saw revenues increase by 3.6 per cent.

The group continues to outperform its markets, with seven of its largest eight brands growing market share on a year to date basis.

In the grocery business, Bisto and Ambrosia both grew sales in the third quarter, reflecting advertising investment for Bisto and continued share gains for Ambrosia.

Sales of Paxo stuffing were “excellent in the run-up to Christmas” while Nissin Soba noodles and Cup Noodle “continued their very strong trajectory”, growing revenues by nearly 70 per cent in the quarter.

Non-branded sales declined by 0.8 per cent in the third quarter as a result of decreased business to business volumes.

In sweet treats, Mr Kipling recorded an eighth consecutive quarter of sales growth, with revenues up 10 per cent as the benefits from increased marketing investment and new product launches continue to realise great progress for the company’s largest brand.

Sales of Cadbury licensed product ranges were ahead on a year to date basis, although slightly tempered in December as lower promotional levels on cake offset the launch of new Cadbury cake mixes.

Non-branded sweet treats sales returned to growth in the quarter with sales up 8.8 per cent compared to last year.

The international business delivered a disappointing result with sales 17 per cent lower in the third quarter.

With new leadership now in place, the group is implementing a revised and more focused approach in order to deliver more consistent sustainable growth, building bigger businesses in selected markets.