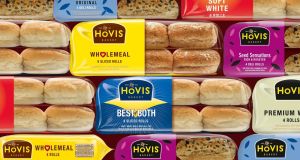 Hovis employs 250 at its plant in Belfast.

Union leaders in Northern Ireland will suspend a planned strike action at one of the North’s biggest bakeries after management at Hovis made a fresh pay offer.

Workers at the Hovis plant in Belafast, where 250 people are employed, had planned to strike from midnight on Friday morning in a dispute over “fair pay”.

Union leaders had warned the strike at Hovis, which produces a range of in-house bakery brands such as Hovis, Nimble, Ormo and Mothers Pride and also own label products for some of the UK’s biggest retailers including M&S, Tesco, Sainsbury’s and Lidl, would cause “considerable disruption “to bread supplies across Northern Ireland.

Sean McKeever, Unite’s regional officer, said the strike action will now be suspended while his union ballots members on the fresh pay offer.

“The workforce had sought a decent pay uplift but were offered only 3.2 percent by management despite the negotiations going through mediation at the Labour Relations Agency.

“In light of the significantly improved pay offer made by management today, our team of shop stewards have agreed to suspend the action.

“We will now proceed to ballot our members on the offer and are hoping to announce their response and next steps within a week,” Mr McKeever said.