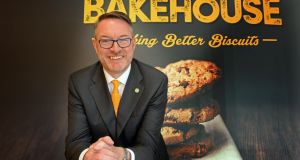 Founded in 2015 by Alison Cowzer and Michael Carey, East Coast Bakehouse manufacturers biscuits from a factory in Drogheda with its product exported to 26 markets.

To date, €23 million has been put in the business via debt and equity with investors including Stephen Twaddel, a former Kellogg’s executive, Patrick Joy of Suretank, Mary Ann O’Brien, founder of Lily O’Brien Chocolates, Richard Cullen, who set up the Jelly Bean Company, and Neil O’Leary of Ion Equity.

Mr Carey told The Irish Times that revenues are currently running at a rate of €500,000 per month or €6 million annually. “We are running at breakeven now,” he said, adding that the company was making good progress in line with its business plan. “The cash burn has ended, thankfully.”

The company has the capacity to increase its revenues to about €30 million over the next five years, he added.

Latest accounts for East Coast Bakehouse Ltd show that it made a loss of €4.8 million in the year to the end of February 2019. This brought its accumulated losses to €12.2 million.

It strengthened its senior leadership team in November with the appointment of Kiwi Sean Murphy as managing director. Mr Murphy was previously managing director of the South African operation of Cadbury owner Mondelez. The company also appointed a new commercial director, and a marketing and innovation manager.

East Coast Bakehouse recently extended its range of products into “healthy and functional” biscuits, focusing on low sugar and high protein. It has secured a contract with Grenade, a leading protein bar brand in the UK.

Mr Carey welcomed the fact that there is now some certainty around Brexit. The UK accounts for about half of its exports, down from a level of 80 per cent that was envisaged when its original business plan was drawn up in advance of the Brexit referendum in mid 2016.

“It will always be the most important market for us and obviously we’re happy that a softer Brexit now looks likely.”

East Coast Bakehouse was given the overall exporter of the year award for 2019 by the Irish Exporters Association.