Grocery sales over Christmas surpass €1bn for first time, but shoppers spend 5.3% less on beer and 2.2% less on wine 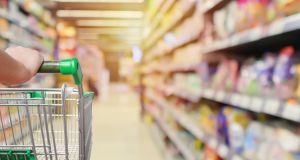 Supermarket shoppers spent €10.5 million less – a 6 per cent reduction – on alcohol in the run-up to Christmas 2019 compared with the year before, according to figures from retail analysts Kantar.

The figures for the final quarter of the year show consumers spent 5.3 per cent less on beer and 2.2 per cent less on wine. Only Supervalu and Dunnes Stores bucked the trend, increasing alcohol sales by 3.9 per cent and 0.7 per cent respectively.

Kantar’s consumer insight director Charlotte Scott said it had been a “relatively sober Christmas”, with shoppers opting instead for non-alcoholic options.

“It suggests people weren’t quite as indulgent this Christmas, and maybe weren’t hosting as much,” she said. “There’s a bit of uncertainty as well, which can also have an impact. Soft drinks were up, so people were potentially switching to non-alcoholic options.”

“Since 2001 the average per adult alcohol consumption has fallen by 23.2 per cent in Ireland according to Central Statistics Office and Revenue Commissioner data,” she said.

“Irish consumers are also becoming more health-conscious. The Nielson figures show that sales of low and non-alcoholic beer jumped by 27.2 per cent during the Christmas period, reflecting this trend.

“A number of producers have released low and non-alcoholic brands in recent years, with many consumers cutting back on their drinking. It’s an area in which we expect to see further growth in 2020.”

However, both Alcohol Action Ireland and the National Off-Licence Association suggested the figures were not indicative of people drinking less, but instead the result of heavily discounted alcohol products in supermarkets.

Alcohol Action Ireland spokesman Eunan McKinney said there was “no question but that in advance of the introduction of minimum unit pricing, the alcohol industry has been discounting much more than previous years”.

The National Off-Licence Association’s government affairs director Evelyn Jones said: “We have seen a sharp rise in the value of discounts offered by supermarkets during key holiday periods, with Christmas being a particular flash point.

More generally, grocery sales over the Christmas period surpassed €1 billion for the first time on record, although there were reductions in many of the Christmas favourites.

The number of people buying turkey, for example, dropped 3 per cent, while the number buying mince pies and Christmas puddings fell 13 per cent and 10 per cent respectively.

Dunnes Stores retained its position as the Republic’s largest retailer, achieving a market share of 23.6 per cent, recording a 4.1 per cent rise in the value of its sales. Tesco lost some market share, closing out 2019 with 22 per cent.

Supervalu held steady with 21.8 per cent of the market, while Aldi and Lidl had an 11.3 per cent and 10.9 per cent share of the market respectively. Both discounters increased the value of their sales considerably.

“Aldi and Lidl have increased their appeal among shoppers at Christmas, and both reached their highest ever festive market shares,” said Ms Scott.

“While in previous years customers have chosen to do their seasonal shopping elsewhere, Aldi and Lidl found success in 2019 by expanding their ranges and encouraging big shops.”

Grocery market inflation across the sector stood at 1 per cent for the period. This figure is based on more than 30,000 identical products being compared year-on-year. The data monitors the household purchasing habits of 5,000 demographically representative households.