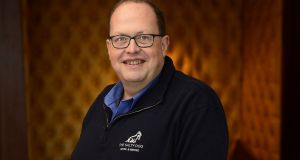 Ken Sharp, owner of the Boat House restaurant and Salty Dog hotel and restaurant in Bangor

Disappointment. I think historically the freedoms of movement to purchase things across Europe, and freedom of employment were all of benefit to us.

The weakening of the pound after the referendum result helped in terms of tourists coming to spend money. There has been a tightening of belts and that could be attributed to Brexit to some extent and could be a further issue depending on how it pans out.

We employ some staff from Europe and they feel slightly uncertain and are waiting to see what happens next. We lost a few staff to work in Dublin because they had more certainty there. A lot of our supplies come through the Republic and we have had increasing costs for food and drink.

We don’t supply out but we rely heavily on imports. Hospitality isn’t seen as an export business but anyone coming out of state and spending money is foreign direct earnings so is the equivalent of an export.

We are. We are looking at costs. Good local suppliers are more competitive now which encourages us to look at them. We have always done a lot of local purchasing but we have items we can only get from down south. The impact on the hospitality sector in GB is not as great as it is on us, because we have the Border.

Best case for the hospitality sector is anything that encourages growth in the economy. A foot in both camps is something we would see as attractive, if people could have access to the GB and the European market.

Worst case is a no-deal crash out which would cause issues with movement around the country, our supply chain and more broadly for the Northern Ireland economy and therefore the service sector.

The key is clear communication with enough time to implement proper planning. Whatever happens we need to know what is going on and have time to adapt to it. December 31st, 2020, seems to me to be completely unrealistic because we are not going to see what the trade deal looks like until later in the year and we will have little time to look at that. We don’t want delays but we need proper time for planning and reaction.

How do you think the Irish/British (or both) governments has handled the Brexit negotiations?

Badly. It appears to me not to have been handled well. There has been a lack of recognition of some of the key issues, a lack of communication to the key parties. To be honest the UK government has only been interested in the UK position and sees Northern Ireland as a complication. The Irish Government is very much looking out from a European point of view and hasn’t realised the issues raised by Brexit. People voted to be out of the European Union, what that looked like nobody really voted for and I think that has been the biggest issue.

Hospitality is changing all the time. But with business in NI there is a resilience. We get on with things despite the politicians rather than anything they actively do. We just get our heads down. We will be stronger, there is room for growth in tourism. We will work our way round whatever Brexit looks like to make the hospitality and tourism sector a success.

This is where it gets difficult. There is my head and heart. Personally, yes, I would because I was against Brexit. From a business point of view, I would just like to get it done because we need certainty. We can’t go through another period like the last two years. Let’s get this done and make the best of it.